“It stirred my blood and cleansed my libido.” —Preston Sturges on Daughter of Horror

As I sit down to write this, I want you to know that I’m rubbing my hands together gleefully and cackling like a mad scientist about to unleash some freakish terror upon the world. Because today I’m going to introduce you to one of the weirdest, most disturbing films I’ve ever seen. And I watch Dwain Esper movies for kicks.

Reader, meet Daughter of Horror. She’s the bastard child of Salvador Dali and Ed Wood. Or maybe H. P. Lovecraft and Mickey Spillane. This 1955 avant-garde independent film drags us through the nightmares and misadventures of an androgynous delinquent chick, “the Gamin,” as she ventures from her hotel bedroom to prowl down mazelike streets. Over the course of one night, she’s nearly assaulted by a drunken bum, gets pimped out to a fat man, commits a crime, and slips in and out of many hallucinations. But where can we draw the line between madness and the squalid horrors of reality?

Directed by the obscure John Parker and written by Z-grade producer/director Bruno Ve Sota (although there’s some debate as to who really deserves artistic credit), this oily, shoestring-cheap horror-noir contains not one line of dialogue. Yep, we’re dealing with a strangely contradictory silent film with a soundtrack. Apart from a few diegetic sounds—essentials like sobs, screams, laughter, and gunshots—you mostly hear a ghoulish atonal score by modernist composer George Antheil, filled with foreboding jazz and the occasional soprano wail.

And—here’s the real boon—there’s the occasional passage of voice-over narration by none other than Ed McMahon, who intones a menacing, ironic commentary over the violence of the action and the Gamin’s psychotic breaks. From what I understand, the original cut of the film, called Dementia, didn’t have that voice-over, but I like it. Most critics have argued that the narration detracts from the integrity of the film.

I would differ—it’s like a parody of Hollywood’s typically ethereal depiction of schizophrenia or characters who start “hearing voices.” Instead of the ghostly whispers of poetic insanity, the Gamin is haunted by an out-of-control melodramatic TV narration. The voice peppers the film with choice remarks like, “Yes, I am here. The demon that possesses your soul. Wait a bit. I have so much to show you. So much that you are afraid to see.” If I ever start hearing an unseen game show host announcer chiming in to narrate my unconscious, I will know that I’ve finally descended into madness. (I’m expecting that voice any day now.)

The muffled, doom-impregnated ambiance of Daughter of Horror truly escapes words. It digs up a seedy universe that’s at once utterly unreal and much more gritty and recognizable than the sanitized sordidness of most films noirs. Grotesques populate its dark corridors, mutant people who scuttle around in the night, like bedbugs on a cheap mattress. 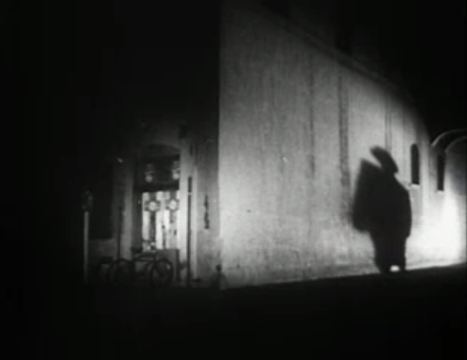 The usual mechanisms of character identification grind to a halt. We struggle to form an attachment to the Gamin, since she’s all we have, but she’s inscrutable at best and monstrous at worse. We’re estranged from the Gamin just as she’s estranged from herself. This sense of alienation and neediness, of not being able to relate to the movie in a usual manner, plunges the viewer into a state of ambivalent confusion and unease.

Indeed, whereas film noir tends to lure us in with its smoke-ring glamour, Daughter of Horror keeps us perpetually at an arms length, disgusted but transfixed. It compels us to keep watching out of a balance of sheer unease and shock—from the very beginning, we know, as we do in nightmares, that something bad is going to happen. We’re only partially right. Lots of bad things are going to happen.

To classify this film as one of Caligari’s children would be to state the obvious; what’s fascinating is how the Gamin fuses the somnambulistic monster, the vile murderer, and the heroine in distress all into one disturbed personality. Freudian overtones also crowd into this dark night of the soul. For instance, the Gamin’s flashback to her ugly childhood with a brutish father and a trampy, self-absorbed mother takes place in a graveyard, no less, which the characters inhabit as though it were their living room.

Although the Gamin’s father died a long time ago, he returns from the grave as a sort of guilt complex incarnate—he appears as a leering patron at a sleazy restaurant and later takes the form of the policeman hunting the Gamin down. Heavy-handed? No doubt, but still powerful and frightening.

Whereas standard Hollywood flicks incorporated psychoanalysis as a means of explaining away complexes, as a kind of tool to decipher the world and make it safer, Daughter of Horror plunges us into a forest of smirking symbols. In this twisted cosmos, a cigar is never just a cigar.

Though drawn in broad, blown-up strokes, this movie still surprises you with subtle allusions and amusing touches. The generally transfixing cinematography shows what veteran director of photography William C. Thompson (Plan 9 From Outer Space, Glen or Glenda) could do when not saddled with Ed Wood’s trashy, inept vision. The film begins with a shot of a city at night with a flashing sign that reminds me very much of the flashing sign skyline opening of Hitchcock’s The Lodger. After that, we cut to a track-in camera movement that creeps past a flashing HOTEL sign into the cheap rented room of our sleeping heroine, where she clutches the bedclothes in the throes of a bad dream. The movie ends with a parallel camera movement, drifting away from the room, before cutting back to that chasm of starry sky. What fearful symmetry!

Leer Cam! The camera slips inside of the room where the Gamin is dreaming… then right into her consciousness.

If the lecherous fat man who picks up the Gamin resembles Orson Welles, as some have noted, the film also references Welles’ style with shots of striking depth, presenting multiple points of interest. In one of my favorite, the fat man gnaws away at a chicken leg while, in the background, the Gamin displays her own shapely legs as a temptation, then sneers when the corpulent creature keeps on chowing down.

This bizarro gem of a movie not only borrowed bits and pieces from great filmmakers, but also foreshadowed future masterpieces. Those track-ins on the hotel recall the probing high angle shots that you see at the start of Psycho. And you’ll definitely recognize the whole smoky, grungy atmosphere of Daughter of Horror in Touch of Evil—they were both films at Venice Beach, California.

So, today I’d like to invite you into this forbidding terrain of vast, cavernous spaces and hole-in-the-wall bars, of predatory men and even more predatory women. I offer you a superb, if sometimes clunky, wide-awake nightmare.

This film is in the Public Domain, which means you can watch and download it at the Internet Archive, as well.

When you’re done, please leave a comment and tell me what you think of the movie!