Florence: Listen, Joan Gale’s body was swiped from the morgue! Have you ever heard of such a thing as a death mask?

Jim: I used to be married to one.

Florence: Then it came to life and divorced you. I know all about that.

It says a lot about pre-Code Warner Brothers that the studio couldn’t even make a horror movie without throwing in a couple of wisecracking reporters, a coffin filled with bootleg hooch, and a junkie. 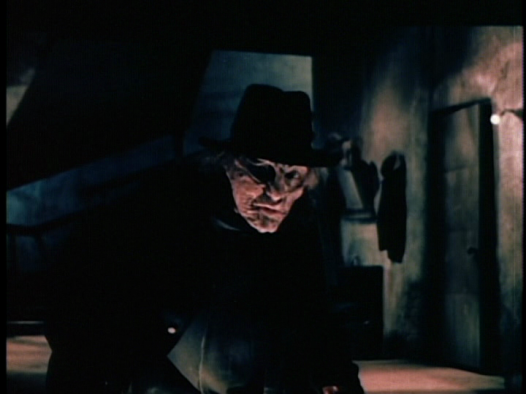 And, I, for one, couldn’t be happier about that. I revel in Mystery of the Wax Museum for the sublime, unintentionally postmodern jumble of a film that it is. This 1933 thriller vividly stands apart from every other horror film of that early talkie cycle.

Even if you were to imagine Night Nurse remade by Robert Wiene or The Cabinet of Dr. Caligari by William Wellman, the result probably wouldn’t be as mismatched and entertaining as this crackling, genre-bending spine-tingler. We’re basically dealing with Gold-Diggers Go to Transylvania.

The pen is mightier than the sword—satirical scribes Voltaire and Florence.

Before we go any further, folks, don’t say I didn’t warn you about plot holes that could conceal an elephant. You should also brace yourself for one of those irritatingly conservative 1930s denouements.

However, it’s all worth it to hear Glenda Farrell casually ask an unsuspecting cop, “How’s your sex life?” [Insert spit-take here.] 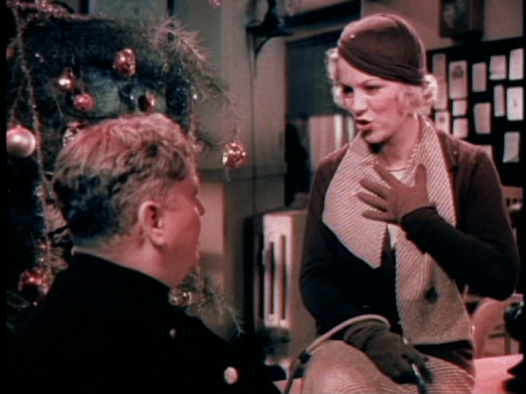 Part newspaper screwball comedy, part Gothic terror, Wax Museum pits one of the most refreshing horror protagonists I’ve ever encountered against the most endearingly clichéd of horror villains. A gutsy platinum blonde sob sister, Florence Dempsey, thwarts the sick fantasy of a disfigured, deranged sculptor, whose name is… Ivan Igor. (You can practically hear the screenwriters arguing whether Ivan or Igor sounds more evil, before deciding to go with both!) It’s like watching two different movies, two different casts, whimsically spliced together. And, in my humble opinion, it works pretty well on the whole.

But I’m getting ahead of myself. I should really explain why Warner Brothers, known for their brassy comedies and hard-hitting crime dramas, made this flamboyant foray into horror. In 1932, to get their share of the audiences flocking to Universal’s monster hits, Warner Brothers, the sassy studio of the people, launched their own prestige sci-fi/horror thriller.

To give it a real edge, Warner had Doctor X filmed entirely in two-strip Technicolor. Following close on the heels of that shocking fright-fest, the studio tried to replicate the success with Mystery of the Wax Museum. With characteristic tracking shots and panache, Michael Curtiz helmed Doctor X and Wax Museum, which both also star Lionel Atwill and Fay Wray. 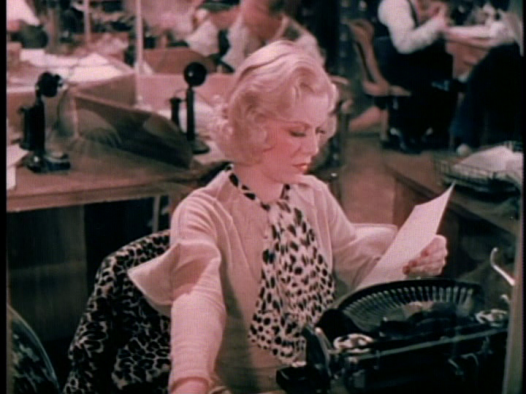 Horror films of the 1930s spent an awful lot of time trying to cope with the disturbing power of images and/or the idea of some process that preserves life while ironically destroying it. I’m not one to attest that every film is actually “about the cinema.” Still, I dare you to watch this film without pondering the parallel between Igor’s wax museum as a macabre attraction and Mystery of the Wax Museum itself as a macabre attraction.

It would make sense that the filmmakers working on nightmare pictures in the 1930s were some of the first people to grasp the inherently uncanny nature of film, how reproduces reality. How cinema can, in a way, resurrect dead things. Nevertheless, no matter how convincing or complete the likeness is, it’s never the original. Just as a lifelike wax figure cannot move and speak, a film painfully recalls to us the reality of the past without ever letting us live that reality or be with those people we see on the screen. 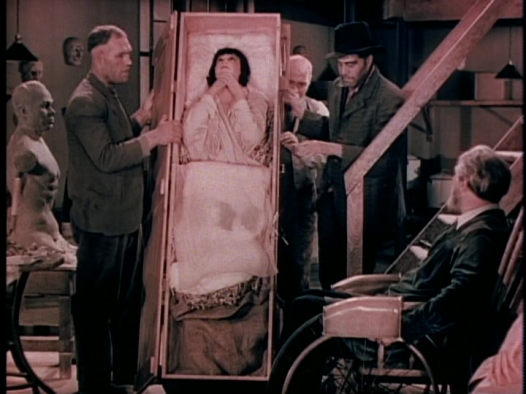 In Mystery of the Wax Museum, Igor longs to duplicate human beings through what are essentially wax mummies. He doesn’t just want to make wax figures that resemble people—he needs those figures to be existentially bonded to the people they represent, molded around their bodies, like a death mask. And, to paraphrase the great French critic André Bazin, what is film if not another kind of embalmment? The cinema is 24 death masks per second.

Where am I going with this? Well, what interests me about Wax Museum is how Igor chooses his victims. On the surface, these choices seem logical: he seeks individuals who look like his wax statues of historical figures that were destroyed many years ago. For instance, when he meets Fay Wray’s character, Charlotte, we see her through Igor’s eyes as she morphs into his long lost Marie Antoinette.

But what really intrigues me is that Igor spares no interest at all in his primary opponent, Florence, even though she persistently asks him questions and threatens his whole project. Is he that clueless?

Interestingly enough, when Igor first spots Charlotte in his museum, Florence, who had been standing right beside Igor disappears in the following shots. Eventually we realize that Florence has sneaked off to investigate the suspicious waxworks. However, her sudden dematerialization strikes me as more than poorly cheated staging or a continuity error. It insinuates an absence into our midst. Whether we recognize this or not, a part of our mind subliminally picks up on something missing. It’s an uneasy spatial ellipsis. 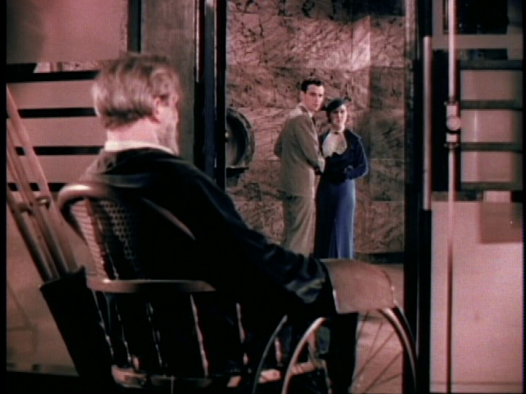 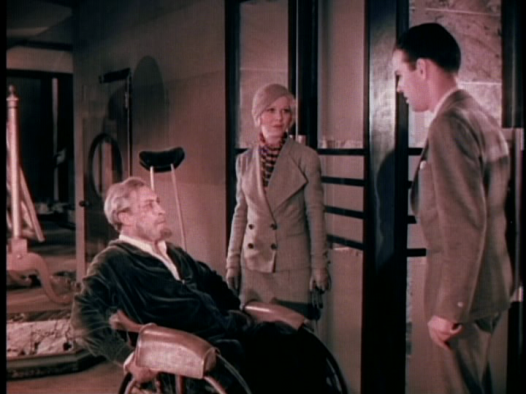 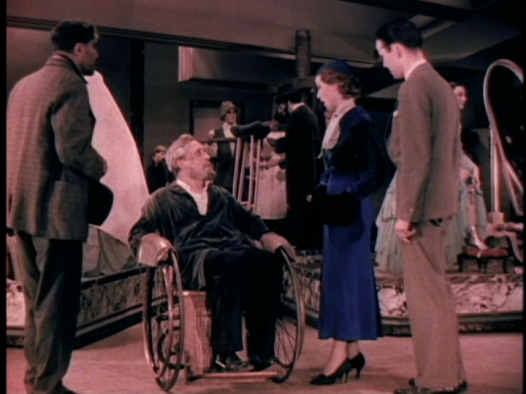 Why doesn’t Igor pay more attention to Florence? Because Florence’s best attributes cannot be rendered in wax. As viewers, we intuit this. The crux of Igor’s obsession reveals itself in his reactions to the divergent charms of Florence and Charlotte—and, more broadly, of Glenda Farrell and of Fay Wray. Fay Wray possesses the classic, serene beauty of a cameo. Glenda Farrell, although no belle, hits you with the force of a cyclone. Her most precious qualities—her verve, her celerity, her personality—lose their value when stilled into silence and inertia. 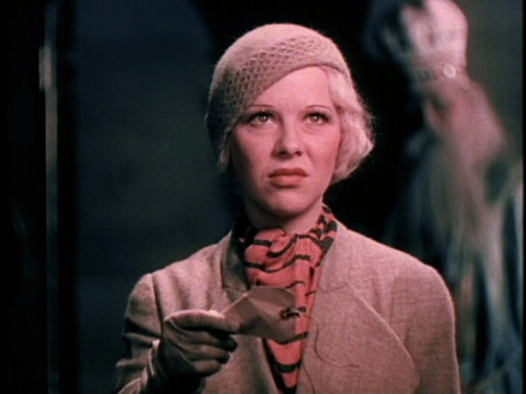 Igor resents Florence because her very existence refutes his concept of human beings as wax figures—and of wax figures as humans. It speaks volumes about Igor that his cherished masterpiece was Marie Antoinette, an icon of stiff, stagnant materialism. By contrast, Florence’s spark of life and mobility saves us from the idea of people as little more than glorified set pieces. 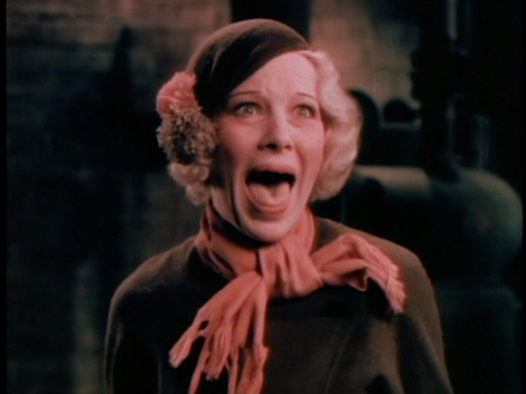 Wax, that lesser embalming fluid, might capture the loveliness of Fay Wray. Yet, it takes the superior mummification of celluloid to deliver Glenda Farrell’s you’re-gonna-need-Dramamine charisma to spectators eighty years later. Her modernity demands a modern medium. And two-strip Technicolor was as modern as it got in 1933.

Today’s spectator, in particular, cannot ignore the eeriness of Mystery of the Wax Museum. We spend most of the film trying to accustom ourselves to the incongruity of seeing what we’re used to seeing in black-and-white transpire in color. The obvious unreality of black-and-white cinematography can serve as a quaintly distancing device. The illusion of presentness furnished by early Technicolor emerges with unexpected power.

Like Igor’s creepily lifelike wax statues (actually thickly made-up extras!), two-strip Technicolor leaves us spellbound and a little alarmed. I remember tweeting along with this film on #TCMParty last October; almost every participant remarked on the strangeness of watching a pre-Code film in such phantasmagoric shadings. I think, on some level, we modern viewers tend to forget that the world wasn’t black-and-white back in the 1930s!

Rather than using two-strip Technicolor as a pallid imitation of real life, Curtiz amplifies the creepy otherness of the early color process, giving each shot the look of a sun-faded painting. A sickly symphony of mint greens and shades of peach sherbet achingly hint at what the actors and sets look like, yet fail to furnish the true realism that we crave. 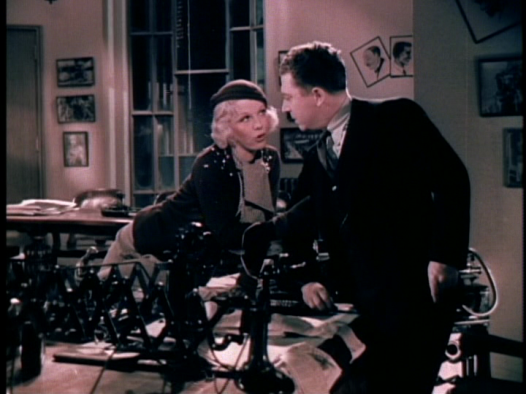 The limitations of representation become more apparent as they approach zero. The closer you get to the thing-in-itself, the farther you feel. To quote an original poster for the movie, “Images of wax that throbbed with human passion! Almost woman! What did she lack?” Igor’s statues are identical to their subjects, but you can sense the missing souls. Two-strip Technicolor brings a now-dead cast to life more fully than black-and-white could and thus paradoxically emphasizes our distance from them. 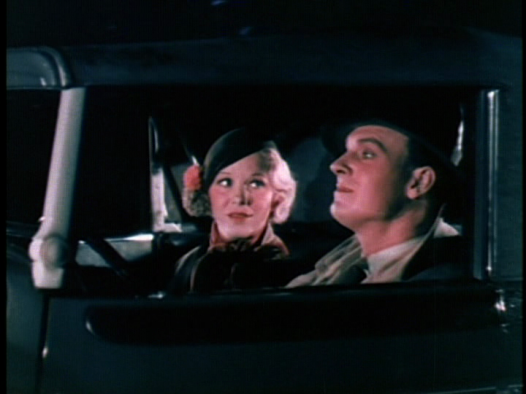 As you watch Mystery of the Wax Museum, notice its breakneck pace and its abundant smash cuts. Bodies are being stolen from a morgue—cut to: a newsroom. A junkie begging for dope—cut to: a Christmas tree in a police station. What the…? The urban velocity of this film gives us a startlingly heterogeneous breed of horror by grafting Gothic elements onto everyday city life. By contrast, the stolid 1950s remake House of Wax regressed back to pure Penny Dreadful stuff and lacks all the pre-Code genre-scrambling that made the original so memorable.

Keep an eye out for oodles of smart visual touches. For instance, get a load of the long crane shot that moves back from a vat of boiling wax to the operating bed where victims will lay to the spout from which the scalding liquid will spew… to the villain entering his lair with a new victim. This camera movement (remember how hard this would’ve been in the early talkies!) tersely shows us the gruesome fate of anyone selected to be immortalized in wax. Once again, Curtiz highlights an absence; we never see the human-to-wax-figure process, but he morbidly implies it with this graceful shot. 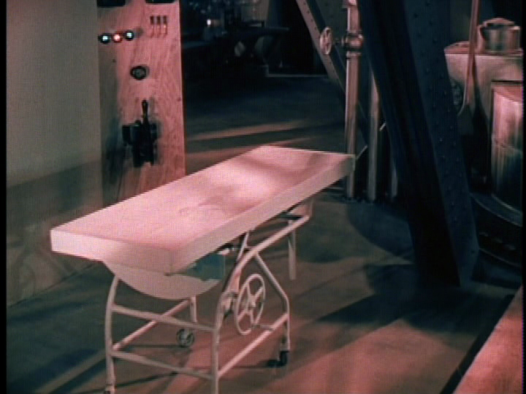 The switch from a high angle to a low angle when Igor reveals his insanity also impressed me. His sudden inebriation with his godlike power allows him to tower over us. It’s an old trick, but a potent one, resulting in one of the film’s spookiest moments.

As you might expect, Glenda Farrell commits grand larceny, stealing every single scene she’s in. Years before she tackled her signature role of Torchy Blane, Farrell soared as this prototype character. If Florence Dempsey doesn’t get to do half as much as we’d like her to, she remains the conduit of the film, weaving together the many plotlines.

Her deductions and detective work lead to the bad guys getting caught and the damsel getting saved in the nick of time. Whether she’s spouting Great Depression slang at the speed of light, grabbing bottles of bootleg whisky in plain view of the police, or screaming at the top of her lungs, Florence wins our love and respect.

Devoid of Stanwyck’s barely repressed anger and Harlow’s frivolousness, Farrell gave us portraits of working women who looked tired, but chic and acted nervously, but competently. No superwoman, she declines to challenge the order the universe, but circulates through it with such vitality and persistence that even the strongest pillars of that universe budge a little—for the better. She’s not making a statement about how women need to fight to exist in a man’s world. She blithely exists there. And that’s enough. Try and stop her.

Costume designer Orry-Kelly aided and abetted Farrell with a wardrobe to die for; I really need a pair of pistachio-green lounging pajamas and a full-length leopard coat with a matching-trim dress. Add them to my wish list. 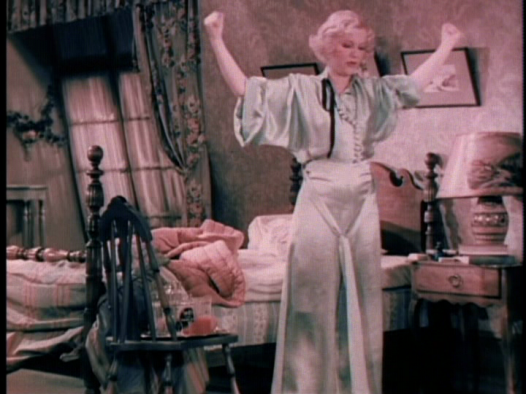 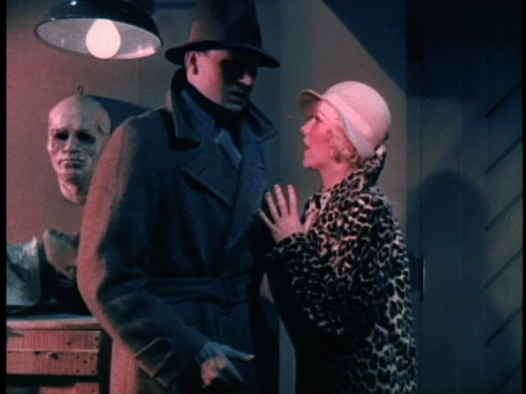 I encourage you to hunt down Mystery of the Wax Museum; alas, it has yet to receive its own DVD release. Interestingly enough, the film was believed to be lost for many years before Jack Warner’s personal print turned up. How ironic would that have been if this exotic jewel of a film had disintegrated into nothing like the wax figures at the beginning of the movie? Thankfully, it was spared from the flames. 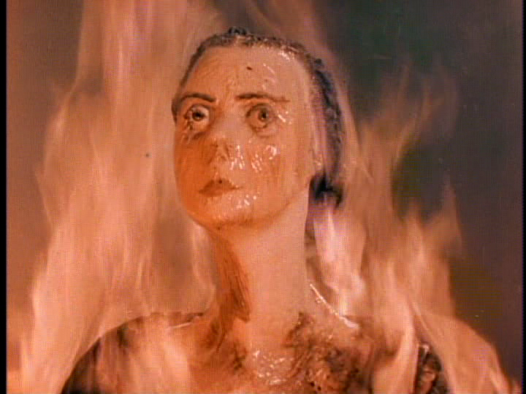 I would’ve never come up with all of the ideas in this post without having read André Bazin’s Qu’est-ce que le cinema?, Dudley Andrews What Cinema Is, and Laura Mulvey’s Death at 24 Frames Per Second. I gratefully acknowledge their work and encourage you to read them! 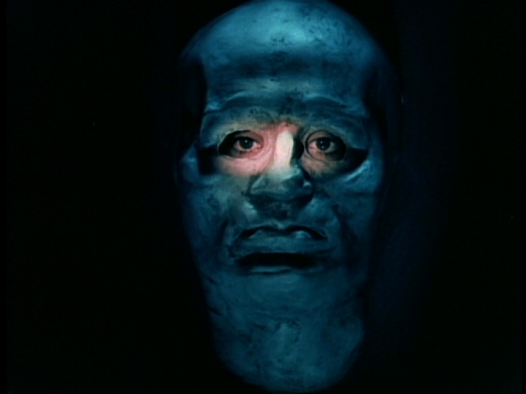 This post is part of the Summer under the Stars Blogathon 2013, hosted by Michael of Scribe Hard On Film Jill Blake of Sittin’ on a Backyard Fence. 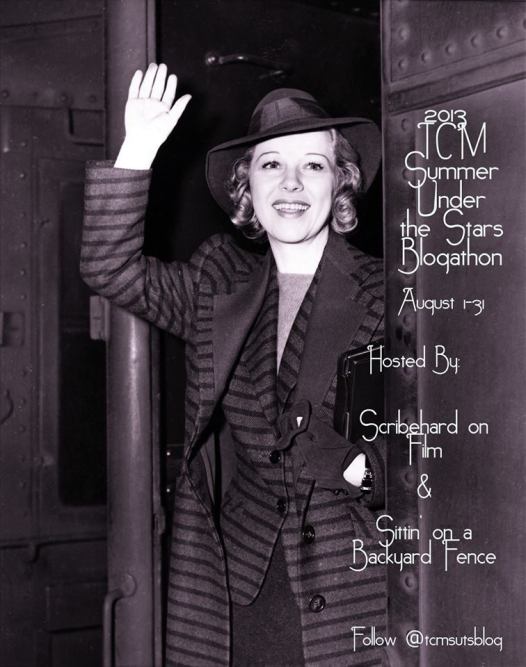 2 thoughts on “Technicolor Nightmare: Mystery of the Wax Museum (1933)”