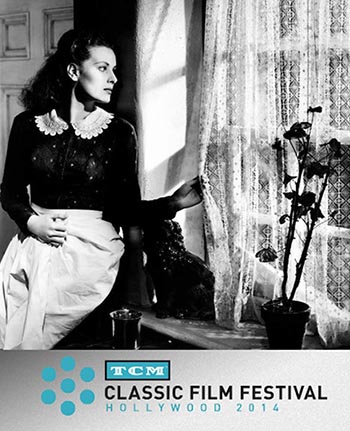 You know what’s the best thing about classic movie geeks?

They come in so many flavors. In my book, the important thing isn’t so much which movies you care about—it’s simply the fact that you care passionately. Last time I checked, you don’t have to be an omnivorous movie lover to ‘qualify’ or anything thing like that.

Anyway, my point is, as I broke out my unreasonable amount of colored highlighters and tried to work out my viewing priorities for the TCM Classic Film Festival, the diversity of selections started to impress me more and more. Before I list my personal choices, I want to give TCM major respect for programming a festival that can satisfy a wide spectrum of interests even within the niche fandom of classic movie geeks.

So, without further ado, here are my program picks—from the oddball to the canonical—including a few toss-ups and back-ups.

Disclaimer: I may be forced to depart from this itinerary when I get there, depending on seating availability, a collapse from hunger and lack of sleep, potentially being kicked out of the theater for wolf-whistling at Errol Flynn or Warren William, or my own confounded whimsy.

For 20 years, TCM has broadcast the best of classic cinema. That’s a delightfully long run to meditate on, and I look forward to listening to staff as they reflect on the milestone and reveal their plans for the future.

Pardon me while I gush for a moment here. The 1930s Universal horror cycle is probably the single most important aesthetic influence in my life. No, really—don’t run away. I mean that in terms of taste. I don’t reanimate dead people. Wait, that sounded even worse…

Anyway, those movies plugged me into the beauty of film at a tender age and, as soon as I got the first DVD sets of these masterpieces, since I’d long since worn out my VHS cassettes, I was a busy little bee watching all the marvelous featurettes. Much of what I know about the behind-the-scenes business of monster-making came from listening to Rick Baker and Joe Dante—who also grew up as precocious horror geeks—talk about James Whale, Tod Browning, Jack Pierce, and the whole scream team.

So, the chance to hear these guys, moderated by TCM’s own Scott McGee, discussing my favorite films in real life will be, needless to say, spooktacular.

I’m hoping that the elegant light comedy helmed by Gregory La Cava will soothe my jet-lagged constitution, like a fizzy cinematic Alka-setlzer for the spirit. (Okay, weird metaphor, I know, but stay with me.)

Nicolas Ray’s vibrant revisionist Western fairly begs for a big screen to attain maximum campy eloquence. The majesty of mature Trucolor Joan Crawford on a big screen tempts me. However, if I can’t handle the intensity, I might opt for another charming comedy starring Ginger Rogers.

As much as I cherish The Thin Man and Stagecoach, which are playing in conflicting slots, I have to follow my predilection for the unusual, which leads me to On Approval. The only film directed by swoon-worthy leading man Clive Brook (who also stars), the cheeky, relatively obscure British comedy of manners sounds like just my cup of tea.

Touch of Evil continues to fascinate me with its byzantine, edgy cinematography and its downright muddy moral takeaway. That said, I might end up attending the Carl Davis event over at Club TCM. I’m a huge fan of his scores (my Harold Lloyd boxed set is never far from me), and I would love to know more about the process behind his compositions. His thoughts about making silent film accessible in this day and age will also prove fascinating, I have no doubt. So, the jury’s still out on this one…

This time block is a total collision of awesomeness. I’m really cursing that silly law of physics that says a body can’t be in more than one place at a time. If I could clone myself I would. Because, more or less simultaneously at different venues we have…

This choice hurts. Bad. I suspect that seeing Powell and Pressburger’s color and black-and-white masterpiece on a big screen will be nothing short of a spiritual experience, so I’m currently tending towards A Matter of Life and Death with Thelma the Great.

No ambiguity here! For me, it’s all about Harold Lloyd and Why Worry? at the Egyptian. Not only will Carl Davis conduct his original score live, but the silent clown’s granddaughter Suzanne Lloyd (who has done an amazing job of keeping his work alive and available) will also introduce the gut-busting comedy. And if you’re going to TCMFF, I’d highly recommend this hilarious film.

You know how a lot of pre-Code movies cop out and leave the audience feeling betrayed and annoyed? Yeah, Employees’ Entrance isn’t one of them. My homeboy Warren William turns in perhaps his greatest performance as a sleazy tycoon who demands a very intimate interview from Loretta Young before giving her a much-needed job at his department store.

You might think that going to a midnight screening of Eraserhead while emotionally drained and jet-lagged is a bad idea, but I say, “Who knows? The movie might actually make sense to me in that frame of mind, right?” That sh*t’s gonna get real. If I can stay awake, that is.

I first saw Chaplin’s three-hankie comedy in abominably pixilated form on YouTube many years ago. Heaven knows, I cried then. I might flood the theater seeing a pristine print of a new restoration on a big screen.

My cult movie hankering will once again be sated with a screening of the original Japanese Godzilla. However, from what I’m hearing around the blogosphere, I might have to skip this to camp out for the next item on the list…

Maureen O’Hara is going to be there. In person. I’ll get back to you when I’ve fully processed that fact.

In her memoir ‘Tis Herself, O’Hara remembered that when the Welsh Singers arrived on the astonishingly authentic film set, “the whole choir fell to their knees and wept.” I get the feeling that the crowds of faithful that show up to see the radiant Ms. O’Hara will have a similar reaction.

Here we come to another difficult fork in the road. If I still have a lot of tolerance for waiting in lines, I might queue up for Kim Novak and Bell, Book, and Candle. If not, I’ve got a pre-Code double bill lined up.

Miriam Hopkins + Franchot Tone + Lionel Barrymore + King Vidor = How the hell haven’t I seen this movie? This little-known pre-Code family drama apparently hasn’t circulated much, despite its stellar cast and direction. Fortunately, that’s about to change.

Bootleggers and blackmailers and call girls, oh my! Another rare pre-Code basks in the limelight at TCMFF.

Poverty Row auteur Edgar G. Ulmer’s movies thrill the eye with gorgeous shadows and moody mise-en-scene, so I’ll revel in the chance to see one of his more prestigious PRC movies on a big screen. Plus, Ulmer’s insightful daughter, Arianne Ulmer Cipes, will introduce this showing of the director’s ambitious women’s drama.

How could I resist a midnight screening of Tod Brownings’ topsy-turvy horror melodrama?

A fair portion of the schedule for the festival’s final day remains TBA. From what I understand, the festival often re-screens movies from previous days. So, I’ll probably end up attending at least one of the not-yet-decided showing, especially if they rerun a movie I wanted to see but missed.

Even if this screening weren’t preceded by a talk about the production of Warner Brothers’ epic storybook classic, I’d still show up for the theater-sized Technicolor close-ups of Errol Flynn. Note to self: bring smelling salts.

It just bloody figures that TCMFF would schedule two of my favorite films ever at the same time. (And if you think I mean The Wizard of Oz as one of them, you clearly don’t understand the twisted inner-workings of my mind.)

Well, everyone else can go skip down the yellow brick road, but I’ll be torn between The Lady from Shanghai and The Lodger. Orson Welles’s exotic head-trip masterpiece and Alfred Hitchcock’s moody serial killer thriller both occupy special places in my heart. In the end, I’ll probably attend The Lodger, which edges out the spectacular Lady only because the Mont Alto Motion Picture Orchestra will be accompanying the silent film.

Throughout my life, I’ve typically dreaded parties. But a live-action #TCMParty? Well, that might unleash even my inner Scarlett.