When in Rome, watch old movies. Rome, New York, that is.

Each year, cinephiles flock to this small city for Capitolfest, a feast of obscure, but awesome films from the silent and early talkie eras.

Released from their archives and vaults, 35mm prints of these neglected flicks once again get to elicit oohs-and-ahhs from appreciative crowds at the Capitol Theater, a movie palace largely unchanged since it opened in 1928. Audiences can enjoy silent movies as they were intended to look, thanks to a rare variable-speed carbon arc projector, and with stirring musical accompaniment from the theater’s original Möller organ. If I were a rare movie, I’d probably think of Capitolfest as something close to heaven.

So, while Capitolfest 12 is taking place, from August 8 to 10, three guesses where I’ll be.

Click the banner to check out the complete Capitolfest 12 schedule!

Actually, I’m still facepalming myself that this will be only my very first jaunt to the destination. I’d probably still be in the dark about the festival if not for a tip from the fabulous Aurora of Once Upon a Screen whom I met at TCMFF. Just in case Capitolfest flew under your radar as well, I feel the need to write a bit about the event as it draws nearer.

Capitolfest groups its features together in seven sets or “sessions” of three movies, with generous breaks in between the blocks. (Read: I might actually get a meal.) Only one film 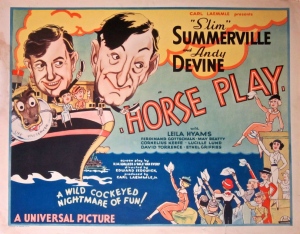 is shown at any given time, so no worries about plotting a complicated matrix of priorities. Since the festival strives to “re-create the experience of seeing movies as when they were new,” each session is rounded out with a few short subjects or varieties.

For instance, the Friday session will include the reconstruction of “a day in the movies in 1933.” The Slim Summerville comedy Horse Play will follow a Hearst newsreel, an exotic Vitaphone travelogue, and a brief musical medley—all shorts similar to those that would’ve accompanied the feature upon its original release. (The only doubt remaining: will Valomilks and Choward’s Violet Mints be available at the concession stand for the full ’33 experience? Or should I bring my own?)

The devastatingly dapper William Powell features prominently in the program as the festival’s “tribute star” for 2014. The Powell selections promise to showcase the actor’s versatility during his early screen career, from a leering villain role in The Bright Shawl (1923) to a complex would-be seducer part in Pointed Heels (1929) to a dramatic tour-de-force lead in Shadow of the Law (1930), among others. I’m especially eager to watch Ladies’ Man, one of two 1931 Paramount films that paired Powell onscreen with his soon-to-be wife Carole Lombard.

The super-rarities on the roster—like an “unseen sound version” of the futuristic British drama High Treason—have majorly piqued my interest. Similarly, the crime-flavored melodrama Forgotten Faces hasn’t been publicly projected since 1928. And it sounds like a real doozy, what with ex-con Clive Brook paradoxically plotting to kill his wife without murdering her in order to keep a promise. Finally, I’d miss my own 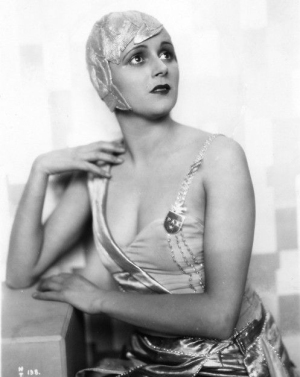 wedding (were I ever to renounce spinsterhood) for the chance to witness the glory of a long-lost two-strip Technicolor sequence. Fortunately, I won’t have to go to such extremities to gape at a rediscovered color number from Pointed Heels, reborn in hues of flame and emerald!

I couldn’t be more delighted that Capitolfest 12 plans on showing so many films I’d quite frankly never heard of before. I suspect that I’m in for a fair share of surprises… and maybe even the odd revelation or two. All roads are leading to Rome!

I’ll be reporting about the event on this blog and on social media. So, stay tuned!

You can also browse the complete Capitolfest 12 schedule or check out the event’s Facebook page.

3 thoughts on “Getting Excited for Capitolfest 12”