The Asphalt Jungle throbs with adrenaline, yes, but with something else, too: regret. I’m thinking specifically of the bouncy yet melancholy scene in which Doc takes a fatal break from his getaway and sits among teenagers, watching a sweater-clad nymphet shimmy and shake to jukebox tunes played on his nickel.

The jubilant jazz and the ignorant bliss of the youngsters accentuate Doc’s old age and his sense of loss—from the years spent in prison, yes, but mostly just from the implacable passage of time.

Doc insists to his driver, “We have time,” although the sad gleam in his eyes tells us he knows that’s a lie. He’s referring to a specific schedule, but the comment could apply more broadly to the inevitability of death and decline that hangs over the film—never more wistfully than in the jukebox scene. Indeed, Huston visually makes the connection between the girl and Doc’s doom: after she gyrates away from a window, the audience can see the police peering through the Venetian blinds, waiting for their quarry.

In another poignant (if creepy) shot, the bobby-soxer dream girl dances right past the camera, revealing Doc’s spellbound, pathetic face as her swinging hips move out of the frame. Next, waving her dance partner away, she wiggles from across the room right into the camera; her undulating torso nearly fills the frame. The dynamism of that girl’s body—the optimism it implies and the hopelessness of Doc ever engaging with it as only a young man could—slaps the audience with agonizing obviousness.

But just as age craves youth, youth craves wealth. We get to listen to the jukebox nymphet precociously nag her boyfriends about their lack of means: “Nickels he’s complaining about. What a spender! Sure he wants a date. He always wants a date. And where do we go? A third-run movie!” As she chides the boys, Doc listens in close-up, wearing the hint of a knowing smile. Then we see the girl among her companions, continuing her complaint. 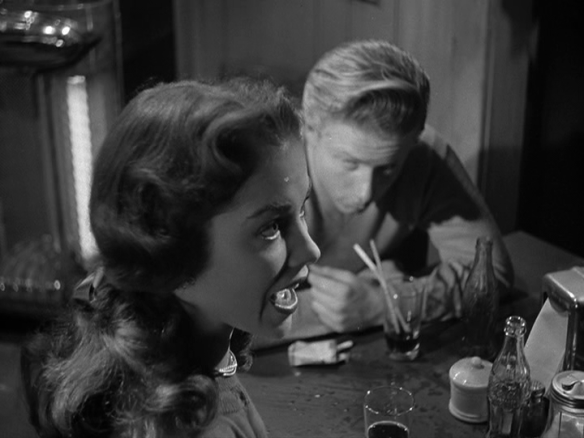 Here Huston frames her from an awkward, slightly high angle, not really Doc’s point-of-view. The angle—working in conjunction with the low-key lighting, oddly moody for the portrayal of bright-eyed teenager—is just off-kilter enough to give us a sense of comic distance. The downward gaze enhances the bitter irony of the girl’s cajoling: the same desire for things, for little pleasures, drove Doc and his compadres to crime.

Who knows? Maybe this nice girl’s nice longings will tempt her and her nice boyfriends to not-so-nice deeds in order to obtain the money for the nice things they want. Or maybe they’ll just settle down and spend the rest of their lives consumed by the honest wants and needs that become the substance of most people’s pallid lives.

“In its way of playing with official censorship, this eroticism [in noir] recalls the elaboration of the dream, according to Freud: instead of showing forbidden realities, one introduces seemingly neutral elements that will evoke them through association or symbolism. Thus dance is immemorial transposition of the sex act itself. But then the thriller has occasionally succeeded in employing such trite analogy with finesse. There are the ‘poses’ struck by Gilda or the frenzied whirling of the bobby-soxer in The Asphalt Jungle.”