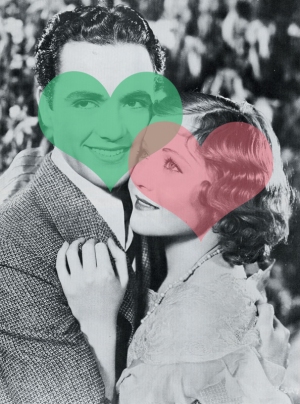 Red and green, stop and go, naughty and nice: two-color Technicolor is literally made of opposites, of complementary colors that cancel each other out when combined in equal measure.

In pre-Code musical rom-com Follow Thru, the two-color palette, a riot of coral and mint, wages a kind of merry war, to borrow a phrase from one of Shakespeare’s best rom-coms.

This past weekend Capitolfest screened UCLA Film and Television’s 35mm restoration of Follow Thru, transferred from the original camera negative. Sitting in the fourth row, I felt as though I were devouring some rare confection, a peachy parfait of cinematic pleasure. Its two-color cinematography, not to mention infinitely hummable tunes by Henderson, Brown, and DeSylva, banished my blues (pun intended).

Based on a hit Broadway show of 1929, this now-obscure musical frolics through a flimsy plot about a lady golf champ (Nancy Carroll) fighting her fairway rival (Thelma Todd) for the affections of a handsome instructor (Charles ‘Buddy’ Rogers). Directors Lloyd Corrigan and Laurence Schwab embrace the toe-tapping whimsy of their source material and never lean too hard on the tension. It’s as though they opened a window in the Great Depression and let an insouciant breeze from the ’20s waft in.

Follow Thru shatters two unfortunately common assumptions about old movies, especially early talkies: first, they were all black-and-white and, second, they were dreadfully stuffy. Well, not only was this 85-year-old musical shot in dazzling color, but it also abounds with more innuendo and risqué humor than you’d find in most modern rom-coms. 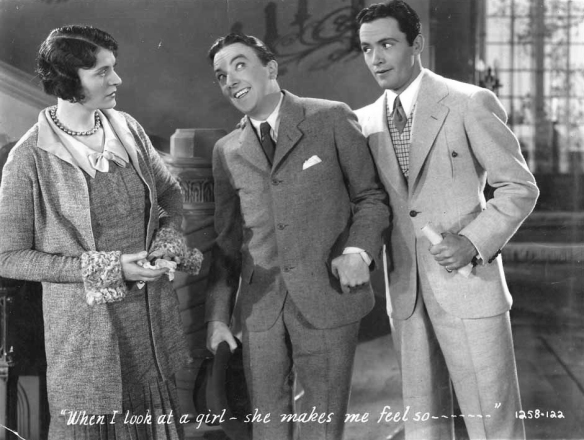 I’ve seen a lot of pre-Code movies, but there were a few lines in Follow Thru that made my jaw drop. For example, curvaceous Thelma Todd hurls herself at petrified millionaire Jack Haley, invites him to come and spend “a week of love” with her, and asks, “Then you will come?” Clearly, um, excited by her advances, Haley sputters, “It won’t be long soon.”

Or consider the sequence where Haley and scene-stealing Eugene Pallette sneak into a locker room full of lingerie-clad ladies with the intention of retrieving a ring. After many shocking revelations for girl-shy Haley, the pair sneak out wearing ladies’ clothes. And, believe me, you haven’t lived until you’ve seen Eugene Pallette in a striped day dress.

Like those inscrutable marshmallow circus peanuts you can buy at dollar stores, the thrills in Follow Thru are cheap and possibly damaging to your health, but irresistible… and sort of orangey. 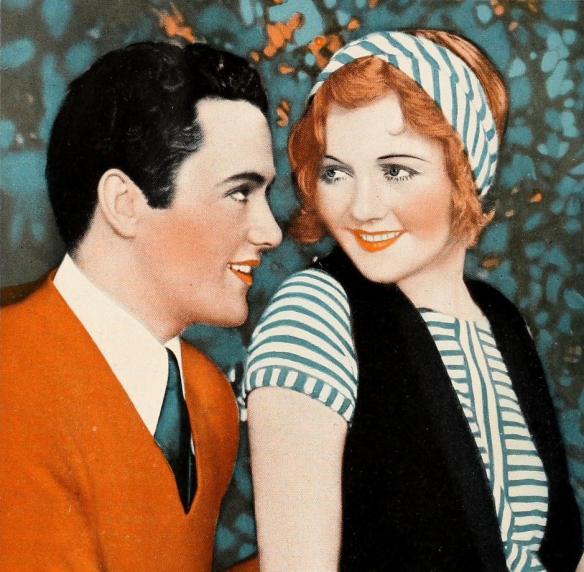 Why, even the movie’s title turns out to be a double entendre (rather like Much Ado About Nothing, actually). At the end, Rogers and Carroll reunite with the promise of canoodling under some orange blossoms. The hero’s best friend drives away and mischevously calls out, “Follow through!” You get the feeling he’s not talking about a golf swing.

Some movies set out to make a point, some smuggle their messages in, and some have no particular agenda other than your enjoyment. Happily in the last category, Follow Thru pampers its spectators with visual indulgences that transcend its source material.

The film introduces its star, Nancy Carroll, 5 minutes into the runtime with a close-up so delicious that I’d swear it had calories. After taking a careful swing with her golf club, Carroll peers intently into the distance. Just as we’ve adjusted to the rapturous splendor of what we’re seeing, Carroll’s face blossoms into a smile and stuns us anew. The Capitolfest audience greeted Carroll’s face with a ecstatic round of applause. 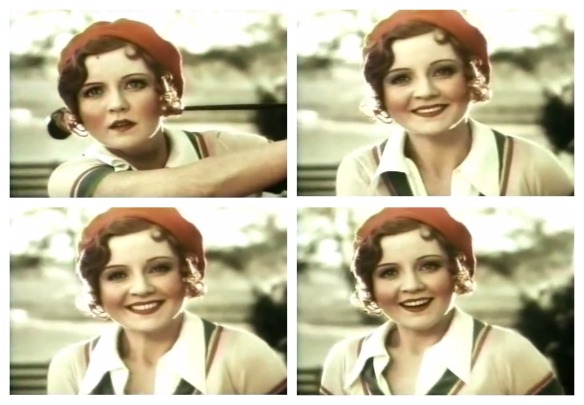 If Technicolor founder Herbert Kalmus had dreamed up a movie star to showcase the beauty of the two-color process, he couldn’t have done better than Carroll, with her effervescent green eyes, auburn hair, and apple cheeks. That initial close-up revels in the startling sensuality made possible by technology. As a 1930 advertisement gushed, “The fascinating Paramount star… becomes a new personality under the magic wand of Technicolor—real, vibrant, convincingly alive!”

But that ad copy only partially gets the spell of two-color Technicolor right. Vibrant and alive? Yes. Real? Not by a long shot. That’s why I love it.

Unlike the full spectrum of three-color Technicolor, the two-color process denies us the soothing true blues, cheerful yellows, and sumptuous purples that we see in reality. Instead, early Technicolor plunges the viewer into a festive, askew universe reminiscent of peppermint candy and just as invigorating. Its charm lies in its unreal-ness.

Due to the vagaries of film preservation and availability, if you’ve seen early Technicolor, it was probably in a short insert sequence, like the masked ball in The Phantom of the Opera (1925), the “Singin’ in the Rain” number from The Hollywood Revue of 1929, or the charity gala scene in Hell’s Angels (1930). These splashy, arresting interludes often display excellent cinematography and color sense, but tend to strike spectators as novelties or flamboyant set pieces, understood primarily in contrast to the rest of the film.

When used for the duration of a feature film, however, two-strip Technicolor gains nuance through its many variations, from shot to shot, from scene to scene. And it’s a sadly little-known chapter of Hollywood history that more than a dozen early sound musicals (as well as some silents and talkies of other genres) were shot entirely in two-color Technicolor.

Follow Thru turns the limitations of the early color process into an advantage by using its restricted range of two opposite colors as a stimulant. The pairing of red and green parallels the madcap rivalries and commedia dell’arte-ish couplings of the film. 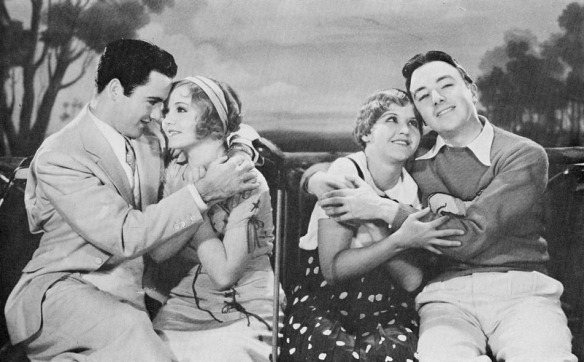 Over the course of Follow Thru’s hour-and-a-half runtime, the piquant balance of reds and greens in each scene heightens the musical’s topsy-turvy charms. A stripe of emerald on a sweater here keeps a scarlet beret there in check. The sparkle of seafoam-colored beads and a spray of ruby feathers (and not much else) on Thelma Todd make an alluring counterpoise to the crimson velvet jacket and forest-green tartan kilt on Nancy Carroll.

The pinks, browns, and subtle celadon shades of outdoor outfits on over 200 extras keep the spring green grass of the Palm Springs fairway from overwhelming the viewer. And a luminous cyan studio backdrop complements the complexions of Rogers and Carroll in a cozy two-shot as they croon—what else?—“A Peach of a Pair” to each other. Covered in blush to register for the Technicolor cameras, the young lovers glow with a rosy flush, as though they share a risqué secret.

Indeed, Technicolor aids and abets Follow Thru’s healthy celebration of desire, courtship, and a new age of permissiveness. The film reserves its flashiest and most humorous use of color for the biggest production number, a playful ode to modern misbehaving. Zelma O’Neil’s performs “I Want to Be Bad,” backed up by chorines who transform from pallid, almost colorless angels to bright red devils… then back into angels.

Though the number takes place on a stage of a country club (albeit one so opulent and vast as to strain my suspension of disbelief), the film medium stretches that space into something fantastic and thrilling.

A lightning bolt hides a cut and transmogrifies the heavenly choir into kicklines of alluring devils in red body suits. The camera pans across the dancers. Cuts between angles—sometimes abstracting the dancers into patterns of red on green—emphasize the hot rhythm of the music. There’s even a very Busby Berkeley-esque touch when a cherub pulls an alarm, prompting a celestial fire brigade to descend from the clouds and put out the blazing sinners, as flames spurt out of the stage!

Even though the racy dancers end up where they started, as subdued, smiling angels, the musical number exalts the joys of cutting loose. (A scene later Nancy Carroll will go a step further and confirm being bad as an effective relationship strategy when she wins Buddy Rogers back from devious Thelma Todd by gulping down cocktails!) As O’Neil belts out, “If it’s naughty to rouge your lips, and shake your shoulders, and twist your hips, let a lady confess: I want to be bad!”

The hyperbolic heaven-versus-hell aspect of the song not only ridicules the notion of badness, but also suggests that being a devil is a hell of a lot more fun. The irony, of course, is that none of what the perky comedienne sings about—makeup, dancing, staying out late, maybe some light vamping—is that terrible. It’s hardly brimstone material to “ask for more” out of life, as the lyrics say, right?

Yet, the sanctimonious moral guardians of the 1920s convinced plenty of people that hell is overcrowded with bad little girls who bobbed their hair, laughed at dirty jokes, and took a swig of gin every now and again. “I Want to Be Bad” even includes an allusion to such self-righteous party-poopers: “Some reformers say a warmer climate awaits you,” O’Neil teases, pointing downwards. When she sticks her tongue out at the camera, in many ways she’s really thumbing her nose at the people who were (and are still) threatened by young women making their own choices and enjoying them.

As it happens, the same gaggle of fanatics and censors that the song mocks would make a movie like Follow Thru impossible just a few years later… Fortunately, the film survives in all its irreverent glory. And if it’s naughty to love Follow Thru, then, darlings, I want to be bad!

Alas, Follow Thru is not available on a legit DVD. The screenshots I’ve used in this post are pale and inadequate representations of the film, but I figured they were better than nothing. You can find it online without too much trouble, but all the prints I’ve seen out there are pretty bad.