Once upon a time in Ravello, Italy, half a world away from Hollywood and tight studio control, John Huston arrived to shoot a thriller with a cast to die for. But Huston had a problem.

Fortunately, he had Truman Capote to write a new one, Peter Lorre and Robert Morley to embellish it, and script supervisor Angela Allen to keep track of it all.

“We had to shoot in order, because we didn’t know where the story was going!” Allen recalled with a laugh at the TCM Classic Film Festival. In conversation with film historian Cari Beauchamp, Allen discussed Beat the Devil, just one film in a career that included The Third Man, The African Queen, and The Dirty Dozen.

When I spoke briefly to Allen on the red carpet, I felt the humbling intensity of her laser-precise gaze, a real-life superpower sharpened by over 50 years of seizing on the smallest errors. She carries herself with a combination of affability and no-nonsense authority. You might assume that she was a career diplomat or businesswoman. And you wouldn’t be far off the mark. If she told you to do something, you’d better do it. (Even Katharine Hepburn found that out.)

During Hollywood’s Golden Age, women filled the role of script supervisor so predominantly that the terms “script girl” and “continuity girl” were the norm. Female professionals like Allen were vital guardians of continuity, the self-effacing, shot-to-shot illusion of a seamless cinematic universe. The stakes were high. A top-notch script supervisor helped create a film that audiences would accept as reality—and a bad one could torpedo that reality and sink the movie.

Before computers and instant photos, script girls documented each take and relied on their detailed notes, stopwatches, eyes, and memories to detect discrepancies. Was that cigarette lit before? Did he say a different word last time? Is there less food on the plate now? A script supervisor has to attend to a million details, editing the film in her mind and anticipating what will and won’t match up. From the sewers of Vienna to the waves of the Mediterranean to the jungles of Africa, Angela Allen did exactly that.

In addition to the pressure of overseeing continuity, Allen faced a problem that’s still far too common in the film industry: predatory men in power. Producer Sam Spiegel was a memorable example. “I was introduced to him by Guy Hamilton, who was an assistant director, then directed Bond films. And he was my protector at the interview, because Sam was quite a lecherous gentleman and I was very young and innocent. Sam said, ‘Take your coat off.’ And Guy said, ‘Don’t take your coat off!’ One said, ‘Sit.’ One said, ‘Stand.’” Allen chuckled at the memory, but I suspect that it would have been no laughing matter if Hamilton hadn’t been there at the time!

Her working relationship with John Huston, on the other hand, was built on respect and trust. “He never met me before I was sent to Africa on The African Queen,” she recalled. “He met me in the jungle. So it was a fait accompli as far as that job is concerned, but we obviously got on and he asked me on all the others.” Huston and Allen would work together on 14 films in total, many of them unpredictable location shoots and jewels of classic cinema.

Which brings us back to Italy and a caper film in search of a story. Through a production nearly as wild and zigzagging as its plot, Beat the Devil posed additional challenges for Allen.

Before shooting could start, Huston needed a script. He took advice from a big shot who happened to be around: David O. Selznick, accompanying Jennifer Jones on location. As Allen remembers, “Although he was not our producer in any shape or form, he recommended Truman Capote who had just written Stazione Termini [alternate title: Indiscretion of an American Wife] for him. So young Truman Capote arrived in Ravello, not knowing what he was going to enter into either.”

However, the film’s mixture of hardboiled dialogue and daffy comedy emerged not from Capote alone, but rather from what one might call a team effort. “He and John discussed something… [Capote] used to write the scenes,” Allen said, “then he’d give them to me in the morning. I’d take them onto the set, we’d change them all because Robert Morley and others were very good ad-libbers, and John would say, ‘Do what you want.’”

Morley and Lorre applied their theater backgrounds to amp up the film’s satirical comedy, resulting in an uproarious shoot. “We all used to laugh so much,” Allen recalled. “There’s a scene where they’re sitting and packing in the room with a suitcase. I must say, there was about 2 hours or more of rehearsal and it was so funny that everybody was on the ground afterward. They’d dream up something every minute. And eventually we sort of refined it to shoot it.”

Now, let’s pause and consider the difficulties of supervising a script that’s mutating before your very eyes. In addition to recording continuity minutia, Allen had to document unpredictable changes in a script with no definite conclusion. All while Lorre and Morley improvised line after side-splitting line. As Cari Beauchamp quipped, “This job brings a whole new definition to continuity, doesn’t it?”

After each day of shooting, Allen closed the loop between screenwriter and cast: “I’d take [Capote] back all the dialogue in the evening and say, ‘You’d better read what we’ve done today for whatever you’ve written for tomorrow, because, you know, it might not match up to what we’ve actually shot.’” 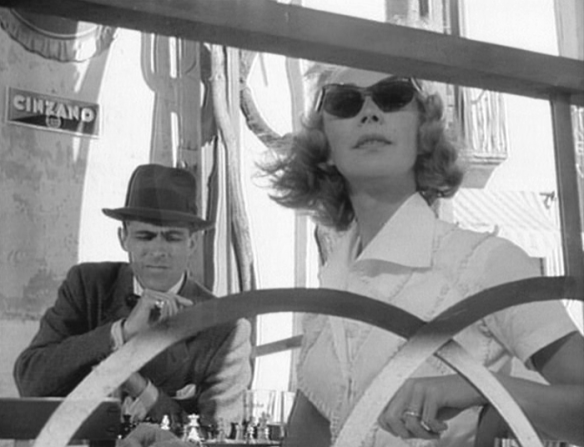 In other words, Allen went above and beyond the already demanding duties of a script supervisor. “Because I was on the set, and there were no computers in those days, I had my steady little portable typewriter—I think it was an Olympia—and I’d be battering out the lines for them once we’d sort of settled on what they were going to say and then they wanted to revise them,” Allen explained. “I’d be typing them out, which really wasn’t my job, but I did. And this was the way we used to go. If we didn’t, what were we going to do?”

One time, life imitated art a little too closely—and Allen stepped in when the cast and crew were quite literally getting lost at sea. “We did have a funny story one day when were were out at sea shooting. The cameraman was Ossie Morris…. We’d turned the boat around and around for the sun. But when we’d finished shooting he’d forgotten to tell the assistant to tell the captain. So we’re sailing and sailing.

“We’d sailed out of Sorrento. And my Italian was a bit better than some of the crew’s so I went and said, ‘How long before we get back to Sorrento?’ And the captain said, ‘Sorrento? We’re sailing to Morocco.’ And so we had to turn round and they’d put the search thing out for this boat, thinking we’d got lost at sea.” 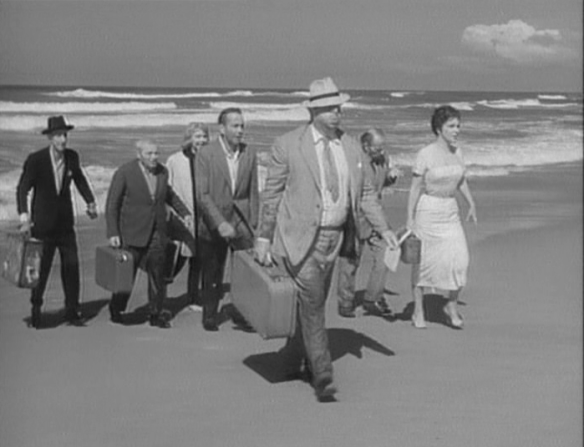 Unsurprisingly, the movie took its good time to wrap up. “I think we were there probably 10 or 12 weeks,” Allen says. “In those days films took longer to shoot. They weren’t so fast. People like the director had a dinner date, so you normally finished by six or seven.”

The cast of characters careened through the production with plenty of funny business that no doubt contributed to the film’s askew humor. Gina Lollobrigida (who discussed Beat the Devil at last year’s TCMFF) had memorized an audition monologue in English. Huston hired her—not realizing that she hardly spoke the language.

La Lollo’s steep learning curve led to some moments of hilarity on the set, Allen remembers: “The English crew used to have rhyming slang in those days. And she had a line ‘tea and crumpets,’ but she didn’t know that crumpets had a double meaning. And everyone was falling about with laughter because she had no idea what they were laughing at. But also, you know, it wasn’t easy for her because she didn’t speak good English. She was learning.” 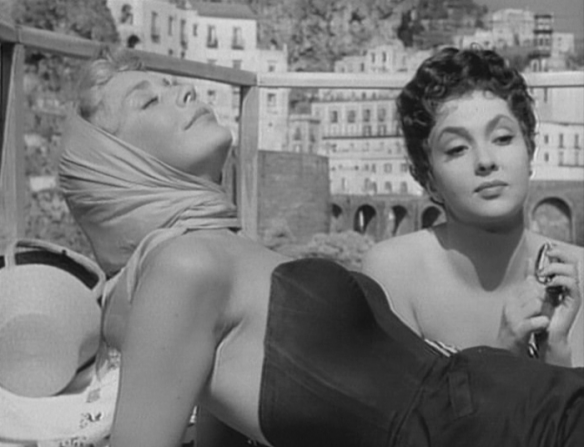 Lollobrigida claims that Selznick baulked at the prospect of a voluptuous Italian ingenue sharing the screen with Jennifer Jones. Angela Allen didn’t deny it, but said that she didn’t witness any hostilities between the film’s leading ladies. “Everybody got on with each other. There were no rows or anything else. Jennifer was a very nice person to everybody, actually.” That said, Jones seemed much “more relaxed” when Selznick wasn’t around, Allen reports.

And how did the unflappable Bogart, both acting and producing, put up with this screwball shooting experience? “Well, he was a bit, I think, irritated at times. But he was a great friend of John’s and they got on and he could always talk him ‘round. So Bogie was there as the actor, so he didn’t interfere in the production although it was his money that was helping us make the film.”

Finally, Allen told us about an unexpected guest on that cosmopolitan set: “Not only did I meet Truman Capote on that film, but a young man who came down with a friend of his whose father was a friend of Huston’s…. He didn’t always want to come out. He liked to tinkle away on the out-of-tune piano in the hotel. I said, ‘I think that young man is going to go a long way.’ And everyone told me how stupid I was.”

His name was Stephen Sondheim. Didn’t I tell you that Allen has superpowers?

So, the next time you watch a John Huston film, check the credits for the name Angela Allen. Every now and then, pry yourself away from the sweeping location scenery, the wry dialogue, and the absorbing performances. Take a moment to imagine an Englishwoman with a stopwatch, a marked-up script, and eyes that don’t miss a trick, standing calmly behind the camera. If you find it difficult to tear yourself away from the illusion, that’s a testament to Allen’s painstaking work. Cinema is an art of coordination and logistics, and she is a master.