“MARRY HIM OR MURDER HIM OR DO WHAT YOU LIKE WITH HIM.” With this 1897 cable Sir Arthur Conan Doyle placed his most famous creation in the hands of another. It was a shrug for the ages, a non-decision that would forever shape the public’s perception of Sherlock Holmes.

The telegraph’s recipient, American actor and playwright William Gillette, took Doyle at his word and recast the immortal detective as such stuff that matinee idols are made of. He turned Holmes, an object of curiosity and awe, into an explicit, if unlikely, object of desire.

Gillette opened up the Holmes character for generations of actors to come by giving him flexibility and humanity. He proved that the sleuth was not only fascinating on the page, but also bankable on the stage—and screen.

The Reappearance of the Reels

In 1916, with over a thousand performances of his theatrical hit Sherlock Holmes behind him, 63-year-old Gillette traveled to Essanay Studios in Chicago to shoot a movie adaptation. It would be his first and last performance in a feature film.

And, for almost a century, Gillette’s Sherlock Holmes went unseen. Until last year, when a nitrate print of the film—long presumed lost—turned up in the Cinémathèque Française’s collections.

Last month at New York’s Film Forum, I was lucky enough to attend a screening of Sherlock Holmes, lovingly restored by Flicker Alley and tinted according to handwritten notes on the original negative, with live accompaniment.

Now, when a film reappears after so long a hunt, the initial jubilation yields to creeping anxiety. The question begs to be asked: “But is it any good?” The possibility of disappointment runs high. Of course, all movies have value as documents of their time, but entertainment value? Not necessarily.

So, let me say this at the outset (well, sort of). I had high expectations for Sherlock Holmes. And I loved it.

From the “lowest and vilest alleys in London” to the “lonely houses” of the countryside, Berthelet conjures up a bygone world both warmly nostalgic and fraught with peril. Characters rove the smoky, burnished universe of Doyle’s canon, instantly familiar to a century’s worth of readers.

The cast’s wildly uneven approaches to movie acting add some unintentional amusement to the film, but don’t generally detract from the story. The extremes on the melodrama-to-naturalism spectrum balanced each other out neatly, pitting caricatured miscreants against more subtle good guys.

Taken as a whole, Sherlock Holmes is a treat. But the film is ultimately a fine gold setting for the star sapphire that is Gillette’s performance.

A Study in Sherlock

It seems nothing short of miraculous that a man who’d never before acted for the camera could deliver such a compelling screen debut. However, throughout his stage career Gillette won a reputation for subtlety, and his celebrated style of underacting transitioned seamlessly to cinema.

He inhabits the role of Holmes, body and soul. Doyle wrote about eyes that “fairly glittered” and a body that can spring “like a tiger” and let readers’ imaginations do the work, but Gillette made Holmes real in a way that satisfied legions of fans. As Orson Welles remarked in 1938, “It is too little to say that William Gillette resembles Sherlock Holmes. Sherlock Holmes looks exactly like William Gillette.”

Indeed, Gillette not only lent his aquiline profile to the character, but also contributed to the public image of Holmes by adding the drop-stem pipe and the lavish dressing gown. He also adopted the iconic deerstalker and ulster jacket and made them Holmes’s uniform for outdoor scenes.

Although this costuming decision would’ve been a faux-pas in Victorian England—Country attire in the city? Quelle horreur!—it reflects the character’s worldview perfectly. The city is the detective’s hunting ground. He stalks his prey through the mean streets of London just as a country squire would track a fox in the forest.

More important, Gillette (even in his sixties) translated Holmes’s languid yet powerful physicality into flesh. His Sherlock can believably stride unarmed into a criminal’s headquarters and, with one intimidating step forward, slap a gun out his foe’s hand, making the bad guy draw back in fear. 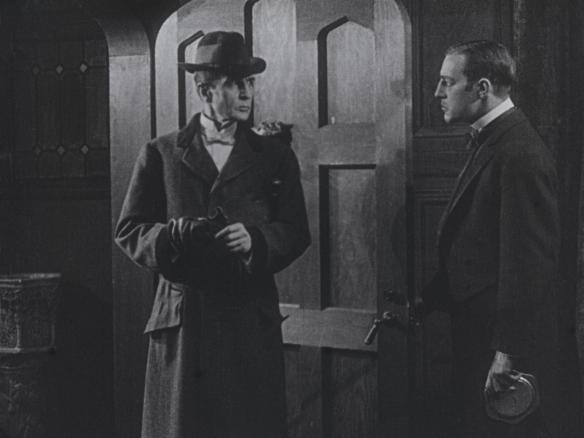 When the spectator first sees him in the film, Holmes is wearing a white lab smock, pouring chemicals from one flask to another. Flames leap rhythmically upwards with each careful drop he adds. Such is the precision of Gillette’s timing that this display of chemistry elicited chuckles from the Film Forum audience. This introduction also echoes the first time Watson lays eyes on Holmes in A Study in Scarlet, heating test tubes over Bunsen burners and exultantly crying, “I’ve found it!” From the beginning, Gillette grounds Holmes the modern myth, Holmes the Victorian superhero, with a sense of wit and whimsy.

Throughout the movie, Gillette infuses humor into the story through Holmes’s sardonic conceit, his slight swagger, the glimmering pride that endears him to the audience.

Surrounded by thugs, Holmes practically yawns in boredom, “All of these maneuvers have been entirely commonplace. Can’t professor Moriarty show me anything new?” Then the lights go out and, in the blackness the point of light at the tip of his cigar traces zigzags around the screen, a ruse to distract the baddies while he escapes. This puckish cinematic touch conveys the quirky brilliance of Holmes’s mind.

In the film’s most mesmerizing scene, Holmes cheerfully defies Moriarty when the menacing nemesis barges into his flat. Ernest Maupain’s fuming, grimacing, scenery-chewing turn as the Professor fares surprisingly well, since his over-the-top malice contrasts with Gillette’s underplayed strength. When Moriarty leaves in exasperation, Holmes kicks one leg up on his ottoman in a stance of sublime nonchalance and triumphantly puffs smoke from his pipe. It’s the gestural equivalent of a “sick burn.” 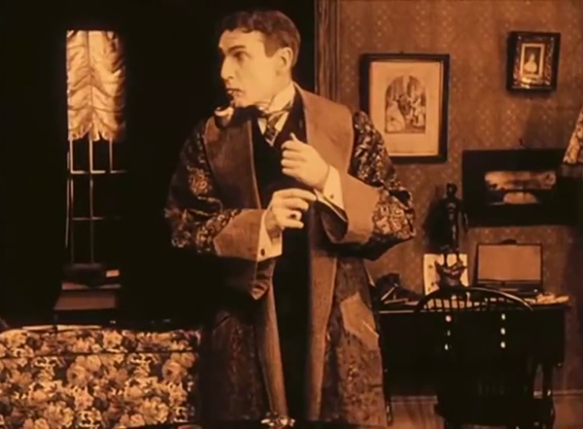 Gillette engages the new medium with virtuosic intimacy. This is a man who transforms the act of taking off gloves into a cinematic event.

The challenge of playing Holmes lies in visually communicating his formidable logic and intellect. Any adaptation runs the risk of getting bogged down in talky deductions or of excluding the viewer from the processes of the detective’s mind. The 1916 Sherlock Holmes avoids both pitfalls, since the lightning-fast current of the great detective’s thoughts expresses itself through Gillette’s elastic face and posture—sometimes changing at breathless speeds, sometimes freezing into a tightly-coiled enigma.

Most daring of all, Gillette took Holmes the “automaton” and gave him a heart.

The Case of the Lovelorn Detective

You can think of the movie’s plot as Sherlock Holmes’s Greatest Hits. It cobbles together elements from “A Scandal in Bohemia,” “Copper Beeches,” “The Final Solution,” and other Doyle stories along with some of the old standbys of stage melodrama. (The surviving version of Sherlock Holmes also displays the influence of the policier serial, since French distributors chopped the narrative feature into multiple parts.)

Spirited Alice Faulkner inherits a packet of incriminating letters from her sister, who’d been seduced and discarded by a European prince. Mr. and Mrs. Larrabee, leaders of a notorious band of criminals, overhear Alice refusing to sell the letters to the aforementioned caddish potentate. The dastardly duo befriends poor Alice then whisks her off to a secluded estate. Though a virtual prisoner, the clever girl hides the letters before her captors can get at them.

Hired to retrieve the letters, Sherlock Holmes storms the villains’ stronghold and discovers the documents. Yet, confronted by Alice’s fierce loyalty to her sister, Holmes falters. He cannot bring himself to take the letters by force.

Wait, what? The man who “never spoke of the softer passions, save with a gibe and a sneer”?

Indeed. There are two things going on here, both of which I approve. First, Holmes respects a woman as—get this—a human being with rights and opinions of her own. Second, that respect blossoms into love.

Some might argue that any emotional involvement is a bad move for a Sherlock adaptation. This line of reasoning suggests that Holmes is inherently rational and thus cannot be romantic without betraying his primary attribute. I disagree. 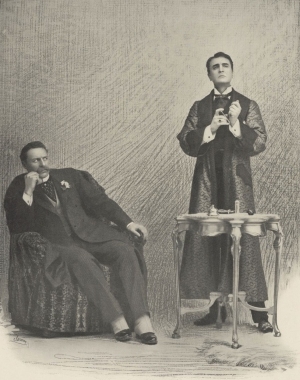 Above all, Holmes thirsts for complexity. He yearns for new sensations, stimulations, diversions, preoccupations, “all that is outside the conventions and humdrum routines of daily life.” This is a man so addicted to excitement that he’ll pick up a grisly 1890s hypodermic and jab it into his vein to deliver a rush of artificial elation—three times a day, mind—rather than risk boredom.

The great detective regularly shoots up, yet recoils from emotion, lest it interfere with the delicate apparatus of his mind?

Please. Love can’t mess you up any worse than cocaine, Sherlock. (Probably.)

By forcing the great detective to wrestle with his emotions, Gillette used Holmes to explore the dilemma of the quintessential modern individual: he’s hyper-aware of life all around him, yet emotionally disconnected. Gathering data to grasp the big picture, the sleuth shuns the messy mysteries of human experience.

Perhaps Holmes and cinema were meant for each other: the man who’s uncannily like a machine and the machine that produces uncannily lifelike illusions. But if art can come from a contraption, then love can certainly come from “the most perfect reasoning and observing machine that the world has seen,” as Watson describes Holmes in “A Scandal in Bohemia.”

The romance unfolds organically within the plot. It builds up not to a love scene but to a third-act confession that brings together Holmes’s two most significant relationships: his growing bond with Alice and his longterm friendship with Watson.

Holmes explains how he’ll let Alice decide the fate of the letters. “Holmes, my good man, you’re in love!” Watson chuckles. The sleuth starts to protest. Instead, he glances down. Bashfully, he puts a hand on his friend’s jacket pocket, close to the heart. Then he looks Watson in the eye and nods, as if to say, “Yes. Yes, I am.”

This small gesture produced gales of rapturous, approving laughter from the audience I watched with. Gillette paces the reaction beautifully, tenderly. By recognizing his feelings for Alice, Holmes doesn’t distance himself from his comrade. Instead, he shares a hitherto-unsuspected piece of his humanity with the good doctor and deepens their confidence.

One understands that Holmes has found the excitement, the tingle, the sense of stimulation he’d been seeking for so long in a romance of the impossible.

His Zen-like detachment yields to his “love of all that is bizarre.” And what could be more bizarre than Sherlock in love? That is the paradox, but, let’s face it, Sherlock has never been one to shy away from paradoxes.

Just as the immortal sleuth returned from his presumed watery grave in the Reichenbach Falls to continue his adventures, the 1916 Sherlock Holmes came back to us from the land of the lost to enchant a new generation. The game’s afoot again for Gillette’s detective, and it’s an adventure to remember.