In 1926, two silent comedians made movies set during the Civil War. One was panned at the time, but went on to win its rightful place among the greatest movies ever made.

The other, praised upon its release, is all but forgotten.

Sure, Raymond Griffith’s masterpiece isn’t as great as The General—and you’d have a hard time convincing me that anything is—but it comes mighty close. There was plenty of greatness to go around in that golden age of comedy. A contract player at Paramount, Griffith turned out hilarious, original comedy confections even within the constraints of the studio system. I’ve said it before, and I’ll say it again: the snide brilliance of the so-called silk hat comedian deserves to be rediscovered and enjoyed today. Modern audiences might even be surprised by how morally daring his comedy is.

Unlike his contemporaries, Griffith rejected the role of the underdog, the harried little man you root for without reservation. By the time he was making feature films, Chaplin wanted you to like him, even when he was behaving badly. Keaton wanted to earn your esteem and to earn it the hard way. And Lloyd wanted to be your personal hero. That contrarian Griffith, far from trying to attract our sympathy, often goes out of his way to make us dislike him. He invites us to question his ethics and to savor his pratfalls all the more because of his doubtful motives and his urbane appearance.

The comedian himself cited schadenfreude as a central ingredient of his humor. As he told Motion Picture magazine, “the high hat stands for aristocracy, for snobbishness, for aloofness. The boy in the street would rather fire a snowball at a silk hat than at any other type of headgear. In reality, he is taking a whack at what the hat represents, not merely at the hat itself.”

Griffith’s character does appeal to the audience through his competence and panache, but, boy, is he a smug, unscrupulous fellow. His one saving grace is that he makes us laugh with his pride as well as with his falls. It might not be off the mark to identify his persona as a proto-playa. Impressing us with his sheer nerve, he wins the audience over with his vices rather than his virtues.

Directed by Griffith and Clarence Badger, Hands Up! takes full advantage of the star’s slippery charm. In the role of a Confederate spy known only as Jack, he inveigles to divert or destroy a shipment of gold that would save the Union cause. Brave, but decidedly not heroic, Jack literally carries a couple of aces up his sleeves, woos two women simultaneously, and cheats a Native American chief out of his headdress with a pair of loaded dice. He’s the man we hate to love.

With his diminutive height and dapper style, Griffith accentuated the comic potential of his starkly un-rugged brand of manhood. In one of the most quietly funny moments of the film, Jack’s primary foe, burly Captain Logan (perennial villain Montagu Love) attempts to intimidate the spy in a stagecoach. Logan pulls out his enormous Colt revolver and casually examines it.

Never one to back down, Jack whips out his firearm—a dainty two-shooter, you know, like saloon madams keep in their garters—and fussily begins polishing it. The enemies sit as mirror images of each other, insouciantly posed but with the hypothetical line of fire from each of their guns trained unmistakably on the other.

On the most obvious level, the wordless, macho exchange tickles us because of its, ahem, symbolism. (Oh, you men, always trying to prove who’s got the biggest, bestest gun!) More important, this bit of business illuminates an amusing contrast between the characters and how they fit into the movie’s historical context. Captain Logan fully embodies the robust masculinity that we tend to associate with our gun-totin’, hard-drinkin’ Civil War-era forefathers.

Griffith’s Jack, on the other hand, might strike us as comically effete for that period—and as rather unprepared for the toughness of his opponent. Yet, like his miniature pistol, he’s discreet and surprisingly useful in a jam. In a later scene, Logan holds a man at gunpoint, the tip of his Colt on the hostage’s head… whereupon Jack darts out from behind and jabs his foe in the belly with the ladylike pistol that looked so innocuous.

In other words, Hands Up! suggests that caliber doesn’t matter; it’s the dexterity of the spy that counts.

The wit of Hands Up! often emerges from clever repetitions: sets of two parallel sequences, shown in succession, become outrageously funny as the differences (or the similarities) between the variations pile up. For instance, the film opens with scenes of the Union and Confederate agents receiving their orders respectively from President Lincoln and General Lee. First, bulky, straight-faced Captain Logan accepts his mission in a static conference room. Lincoln turns to Logan and to Allan Pinkerton, head of the Union Intelligence Service and future founder of the famous detective agency. The President confides, “Gentlemen—this is a secret between the three of us.”

Immediately afterwards, Jack obtains his instructions in a scene that begins the same way, but ultimately overflows with kinetic hilarity. A succession of classics from the slapstick playbook embellish an interaction that, just a moment ago, served as standard exposition. As General Lee and his aide wait in a cabin under heavy Union fire and bombardment, Jack bounds off a horse and darts into the meeting place in a whirl of dust. 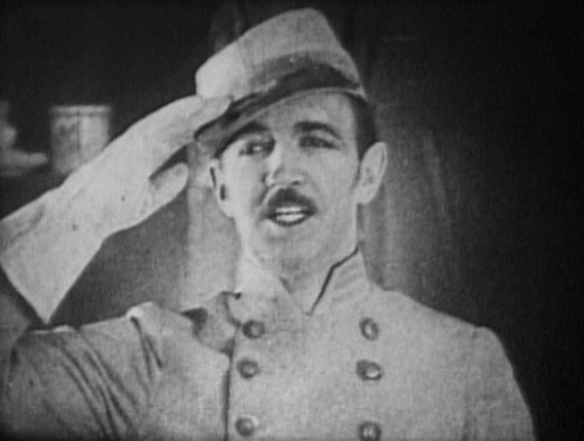 Lee explains the commission and Jack accepts, just as a bomb detonates the cabin sky-high, leaving Jack and the General shaking hands in the debris. By leading us to expect identical (and thus rather tiresome) scenarios, Griffith and Badger undermine the viewer’s expectations—and then literally blow the roof off of them.

Unfazed by the explosion, Lee echoes Lincoln’s words exactly, “This is a secret between the three of us!” An errant bullet mows down Lee’s aide.

Jack doesn’t flinch and dryly corrects the General, “The two of us, sir.”

Now, that update is funny, but a pretty damn morbid kind of funny. Even Lee looks a trifle scandalized by Jack’s lack of shock. Griffith engineers a joke that depends on the audience’s desensitization to onscreen death, or at least to the deaths of characters we don’t know well. His barely-there quip reminds me of the wry James Bond one-liners that make us chuckle just after 007 has dispatched a henchman.

While I’m on the subject of everyone’s favorite super-spy, I’d note that our Jack comes across as downright Bond-ish in his luck with the ladies. The most fertile running gag of Hands Up! involves Jack courting two daughters of a pro-Lincoln mine owner with a series of identical gestures. Towards the end of the film, he’s trying to make a getaway with the gold when each sister stops him. Within the space of a few minutes, he proposes to not one, but both of the girls—in the exact same manner!

Played through once, the mini love scene might provoke titters of laughter by gently lampooning melodramatic love scene tropes. Played through twice, with recycled intertitles and all, the scene’s satire on relationships ascends to a truly farcical level. 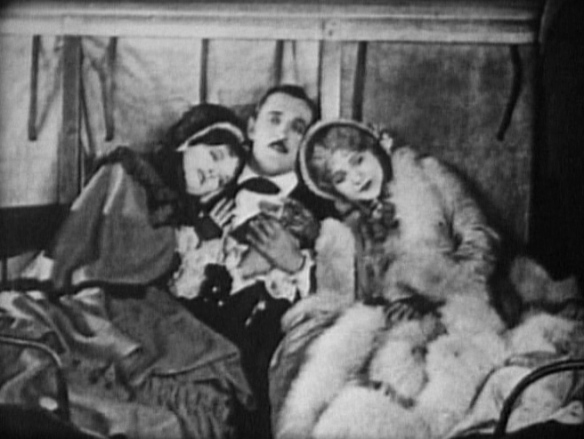 Cunning as its saboteur protagonist, the comic style of Hands Up! also draws deftly on illusion and ellipsis. For example, early on in the film, Jack is discovered as a spy and about to face a firing squad. The entire execution scene revolves around Jack’s clever ruses to distract his would-be executioners. We neither see him being caught, nor do we actually see him escape. The sections of narrative that most silent comedians might be inclined to emphasize and elaborate on have been omitted entirely. 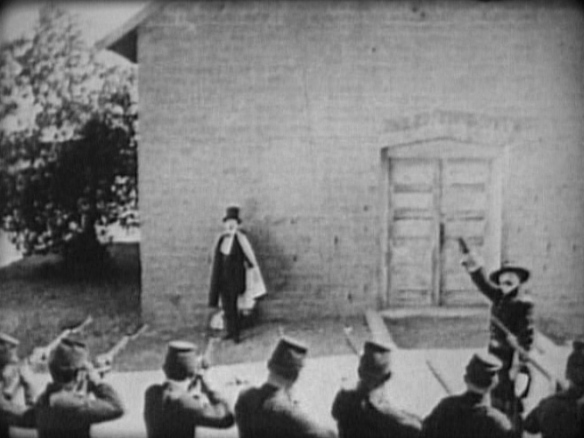 In fact, the audience only learns that Jack has escaped when the head of the firing squad does—and it gives us a moment of supreme tension. The line of gunners fires and we wince. Huh? What? Who kills off the protagonist? But Jack, apparently tied up and facing a wall, doesn’t collapse. The soldiers fire again. He’s still standing? How is that possible? The head of the squad steps forward to check—and realizes that his men had been shooting at a trompe l’oeil painting that the prisoner had daubed on the wall. (Evidently, Confederate spies are forced to take a course in rapid-fire oil painting before entering the field.)

Later in the film, Jack relies again on the power of illusion to save his hide by tricking an enemy to fire at his reflection instead of him. Because the audience only sees into a fragment of the room where Jack is hiding, we can’t know that he’s stowed behind the door—away from the line of fire. In this instance, an illusion plus a spatial ellipsis generates tension and then relief. While the gunpowder clears, we see Jack hastily making his getaway.

Now, I’ve really only scratched the surface of this rich, action-packed classic. You really owe it to yourself to see the movie. Like many of the best things in life, Raymond Griffith’s best work demands a little effort—to track down a scarce DVD or scout for an even scarcer screening. I’m sending you, dear reader, out on a little mission like Jack’s: retrieve the comedy gold. Perhaps then this movie, and the sublime comedy of its secret agent protagonist, won’t be such a secret anymore. 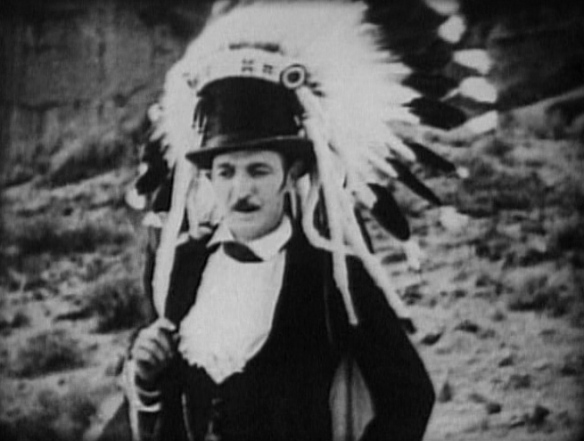 (Note: Hands Up! is not by any means politically correct by today’s standards. Duh. It was made in 1926 and was cartoonishly depicting 1864. That said, I refuse to make any apologies for a movie that’s still less offensive—and way more funny—than plenty of what you can watch on TV right now.)

This post is part of the Snoopathon, a blogathon celebrating spies in classic cinema, hosted by the amazing Movies Silently. Click the banner below to check out the other entries!