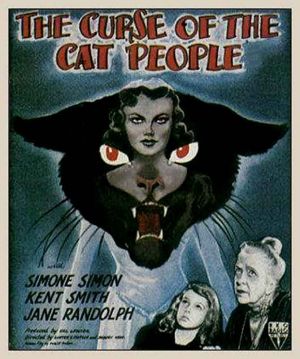 Stunning camerawork. Noirish lighting. Deep psychological insight. Moments of elliptical, primal terror. All of these qualities fuse to form the meteoric legacy of Val Lewton, a powerhouse of the horror genre. But, for me, there’s one essential element missing from the list above: complexity of perspective.

When you watch a Val Lewton film, you’re often plunged into the tortured psyche of not just one character, but of several. Some movies, especially horror films, resort to a fixed point-of-view, linked to a model of absorption and identification with the main character. Lewton’s horror films, however, jump into the minds and souls of different people, creatures, and even, I would argue, cultures.

From voice-over narration to framing to subtle changes of mise-en-scène, Lewton and his collaborators employed many techniques to shade and shape nuanced points-of-view. In so doing, the auteur pioneered the “psychological realism” that was to become a hallmark of later European art cinema. Except that Lewton’s movies are a lot more fun, frankly.

So, for this special occasion, the 2012 Halloween Val Lewton Blogathon, I’d like to take a look at three Lewton films that transcend horror as a genre through their manipulation of perspective. Instead of mere thrills and chills, these movies become bridges between good and evil, between fantasy and reality, between innocence and experience.

Even though Tom Merriam (the guy being threatened with a knife below) serves as our clean-cut, likable protagonist, he’s really just part of the stakes of this self-consciously allegoric struggle between good and evil.

After all, we never get an ounce of Merriam’s subjectivity—at least not as we do for Captain Stone and for the deaf-mute Finn. At different times in the film, voice-over narration allows us to hear their thoughts or delusions. For instance, when Stone is worried that his crew will mutiny, he hears the doubtful statement, “Maybe the boy is right” evolve into “The boy is right!” as it loops over and over on the soundtrack.

A POV shot from Stone’s perspective sets up his psychotic break, as we begin to hear his obsessive thoughts. 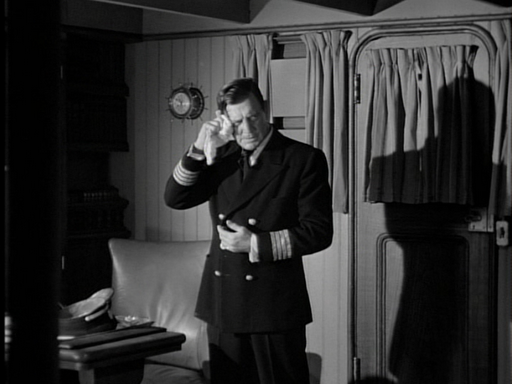 The audience is privileged to even more of Finn’s thoughts. We meet him just a few minutes into the film—Merriam bumps into him and we expect to stay with Merriam. However, the camera stops and tracks in on Finn’s rough, stirring face as he “speaks” to us through the film medium—something he couldn’t do with his voice, being unable to talk. 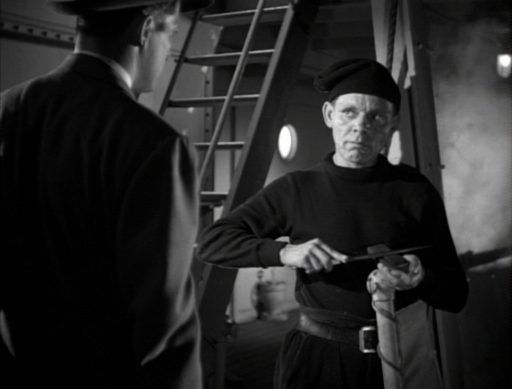 Throughout The Ghost Ship, the camera repeats this almost spiritual, creeping, reverent track-in. When Robson focuses on Finn, he freezes the action and emphasizes the kind of telepathic link the viewer possesses with this character, thanks to the voice-over. 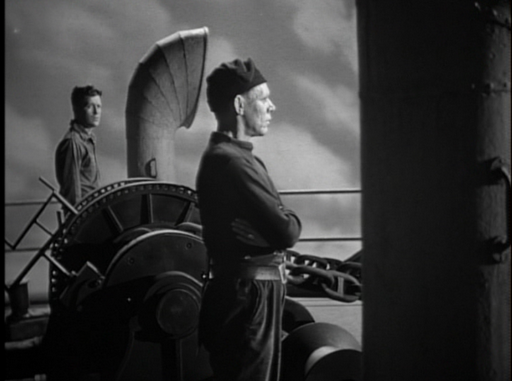 In fact, Finn’s voice-over narration concludes the film, after he’s slain the tyrannical captain and restored Merriam’s faith in human nature. Like an omniscient angel, he affirms, “All is well,” to end this searing morality tale, as he stands by the wheel to guide our gentle hero.

The Curse of the Cat People (1944) – Cinematic Fantasy

People have written books about perspective and subjectivity in The Curse of the Cat People. Rightly so. I’ll restrain myself to noting that Amy’s giftedly artistic, flamboyant perspective motivates all of the film’s beauty. Her quicksilver, low-key lit fantasies, as the trees darken and dance around her and Irena sings to her in the snow, endow her make-believe scenes with a poetry that the camera can enunciate. 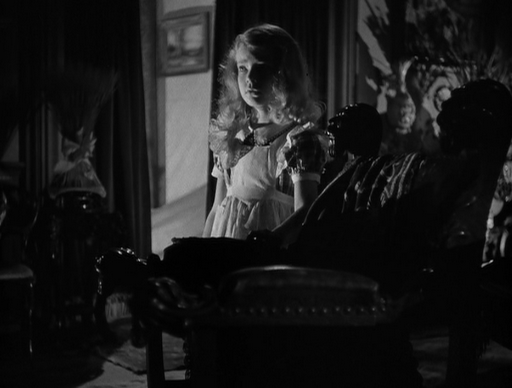 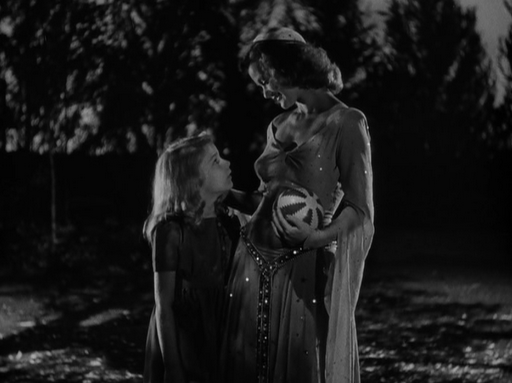 In contrast to the clean lines of the Reed home, Amy’s fantasies dwell in forest lands which she infuses and populates with her feverish imagination.

She also brings legends to life. Both she and we hear the sound of passing wheels transform the clip-clop of the Headless Horseman. 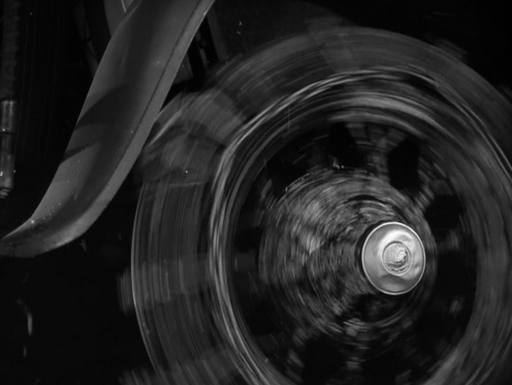 To Amy’s eyes, an old woman telling stories turns into a glowing wellspring of entertainment. 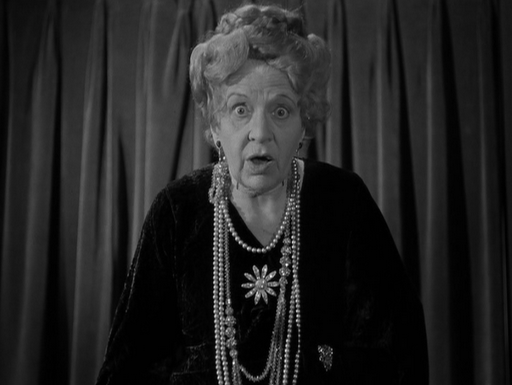 Most importantly, her fantasy saves her life as she projects Irena onto the potentially homicidal Barbara. Amy’s innocence and conviction forces Barbara to realize that she should be Amy’s friend, instead of her killer! 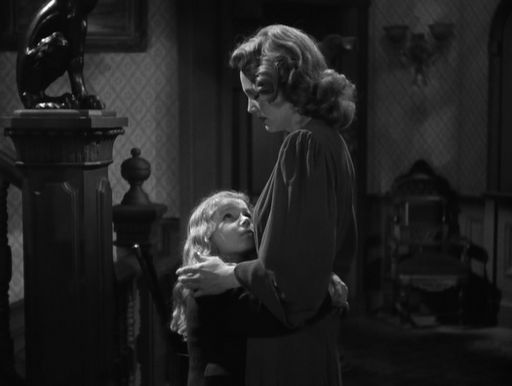 When we fantasize, Lewton shows us, the world ascends to its highest level of enchantment. Why, oh, why would we ever want to throw that away and “grow up?” We shouldn’t, which is why, in the end, Oliver embraces Amy’s fantasy and “sees” Irena in the garden. The lost are never lost, so long as we keep them in our mind’s eye. Through the make-believe of movies, Lewton encourages us all to see what might be there and cherish it. The joy that illusions furnish us with, that glee more than compensates for being a little, well… deluded. 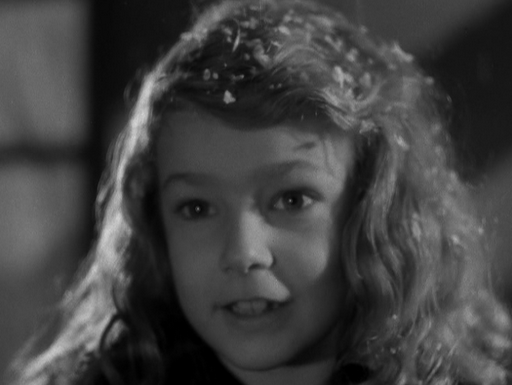 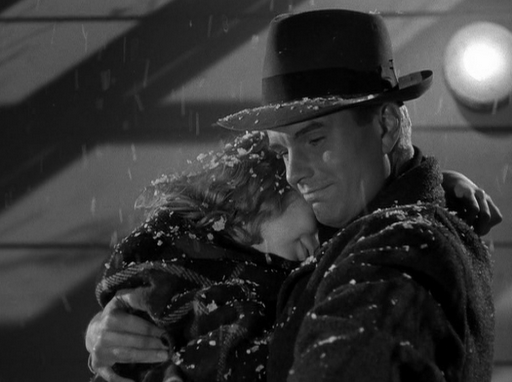 The voice-over which opens this film conforms to a long tradition of plucky female protagonists who reveal their struggles to the audience. It’s film’s inheritance from the 19thcentury novel. The narrator reassures us and suggests that we will be guided through the plot by a sensitive, caring woman who will both relate and reflect on events. And so she does.

Betsy Connell, a nurse, tells us about how she feels about the tropic night sky—and we see it. 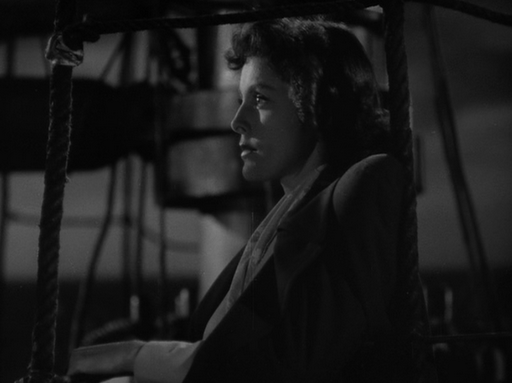 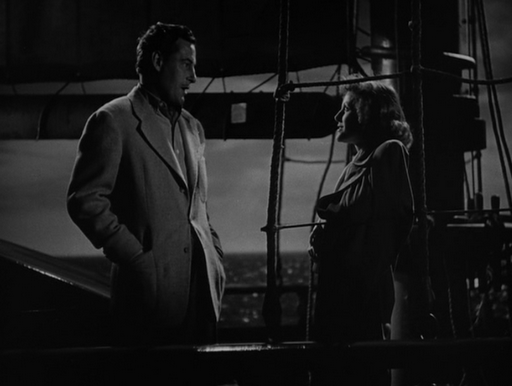 She describes the stillness of the Holland house—and we see it.

She broods over her love for Holland—and we see her brooding by the ocean.

In other words, the film’s construction allows us to feel aligned with her perspective. And then, like, halfway through the film, the voice-over drops out, right about the time when Betsy visits the voodoo grounds. From then on, the soundtrack vibrates with the maddening drums. This shift gives the impression that the film has been subsumed by a consciousness greater and deeper than Betsy’s, a consciousness linked to the film’s most powerful symbol—the slave ship statue of Black Saint Sebastian. The Voodoo, Afro-Caribbean sounds and sights have commandeered the film, reclaimed it from the linear 19thcentury trajectory, to share woe, passion, hate, violence, and finally, peace.

Just as the ceremony seems to take over Jessica’s burnt-out consciousness, so too does the island culture seem to permeate and influence the conclusion of the film, taking it away from the white, optimistic female protagonist. It’s a very modernist take on Jane Eyre… slipping from a relatively straight-forward narration to something deeper and more mythic. After all, the key ending scene, in which Carrefour frightens Wesley into the sea, doesn’t even involve Betsy! Even the images could be interpreted in several different ways: is Carrefour trying to save the sinners as he reaches for them… or push them into the sea? 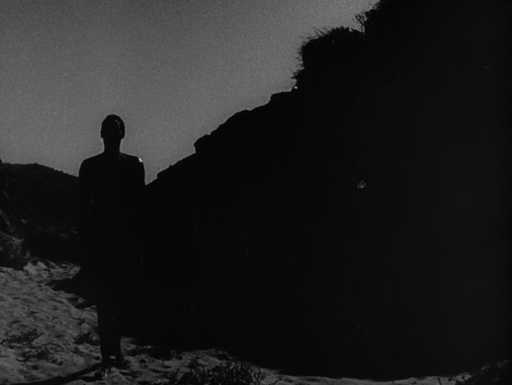 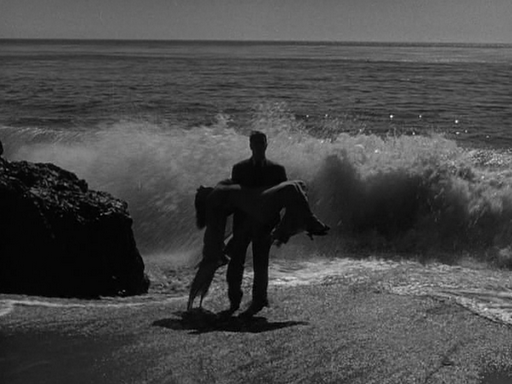 In the concluding sequence, the coda of the movie, a soulful native voice speaks the moral of the story and intones a prayer that binds together the Voodoo and Christian traditions.

Ti-Joseph’s voice-over explains that Jessica, the white zombie, was always a zombie, even while alive, because of her sinful desire to wound others:

Oh, Lord God most holy, deliver them from the bitter pains of eternal death. The woman was a wicked woman, and she was dead in her own life. Yea lord, dead in the selfishness of her spirit. And the man followed her. Her steps led him down to evil, her feet took hold on death. Forgive him oh Lord, who knowest the secret of all hearts. Yea Lord, pity them who are dead, and give peace and happiness to the living.

As the Black natives bring the bodies from the ocean, past the Saint Sebastian statue, Betsy no longer stands out as the moral center of the film. 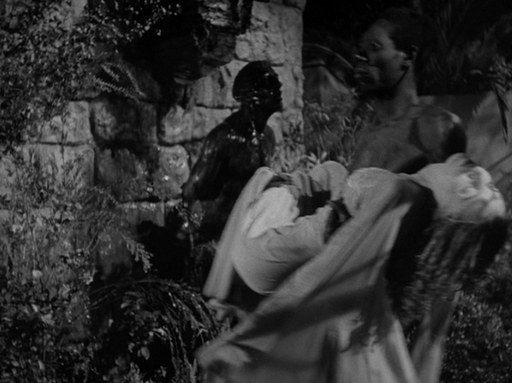 Betsy’s sweet, sincere, but ultimately limited perspective has succumbed to a broader, more resonant point-of-view, one which echoes through time to deliver a message of transgression, pain, and forgiveness.