We classic movie geeks know a thing or two about suffering for what we love.

We grieve over the films locked away in studio vaults.

We watch dreary, fuzzy transfers of hard-to-find movies and fantasize about what the film would look like with some tender loving care.

We fork over whole paychecks to go to festivals where we try hard not to blink during screenings of sublime rare films, knowing we may never see them again.

So, good news—a lost film found, a DVD or Blu-Ray release of a buried classic, generous funding for archives—means a lot to this community. And some recent developments have made me jump for joy.

Film historians James Layton and David Pierce, co-authors of the sumptuous and fascinating Dawn of Technicolor, 1915–1935, are advising on the restoration. I got the

chance to ask Layton, manager of MoMA’s Celeste Bartos Film Preservation Center, a few questions about the restoration, the film, and his and Pierce’s forthcoming book, King of Jazz: Paul Whitman’s Technicolor Revue.

If you’ve seen this elusive early sound milestone, you’ve probably seen a mutilated version. According to Layton, “No version of King of Jazz seen since the 1960s has been close to the original release version (which was first screened in New York City on May 2, 1930 at 105 minutes). The VHS releases and various 16mm prints floating around have had at least ten minutes missing and scenes in the wrong order.”

And, as if that’s not bad enough, the way those versions look could give anybody the shrieking fantods.

Early Technicolor’s restricted palette lent a refreshing, eye-popping vigor to trippy early musical sequences. But you’d never know that from the old transfers of King of Jazz circulating these days. With washed-out actors, ghastly dried-Playdough pinks, and heinous shades of blue, the VHS version I saw seems more like a horror movie. When I’m watching Bing Crosby’s first film appearance, I shouldn’t be thinking that he bears an alarming resemblance to Chucky. 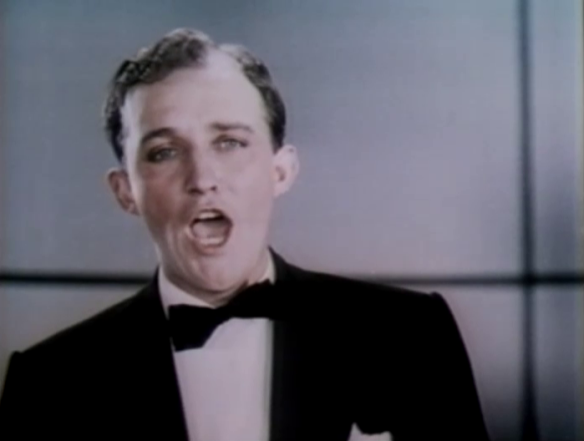 Honestly, squint a little, and you’d think the colorization folks had gotten out their big box of crayons and gone to town. Shudder, shudder.

(Note: most screencaps in this post come from a much prettier original trailer for King of Jazz, which you can watch at the Internet Archive, NOT from the awful feature-length version I saw.) 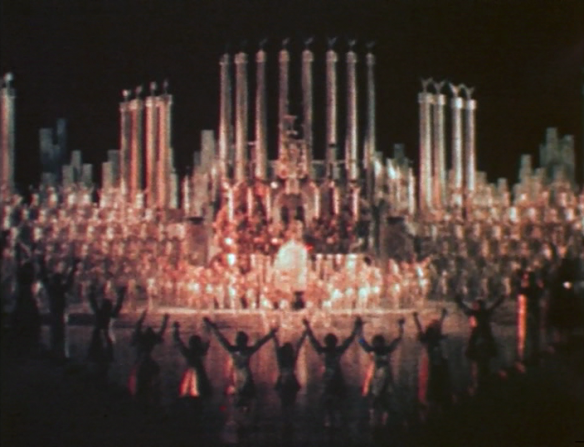 If ever a film needed the royal treatment, King of Jazz is it. Heralded since 2012, when this blog was just a gleam in my eye, Universal’s restoration is finally on the verge of bringing all that jazz back to theaters.

The restoration primarily draws on a pristine but condensed camera negative, sliced down to a 65-minute version for a reissue in 1933. Compare that with an original running time of 105 minutes. (Pause for facepalm.) Fortunately, scanned nitrate prints from the Library of Congress and the Danish Film Institute can fill in the gaps.

As Layton told me, “I haven’t seen the finished restoration yet, but I can confirm it will feature footage that has not been seen by audiences since 1930.”

He and Pierce had initially planned to write an article about King of Jazz to mark the restoration. “But as we were researching we kept finding more and more amazing resources that were too irresistible not to draw upon. We soon decided we had enough for a book!”

King of Jazz: Paul Whiteman’s Technicolor Revue will include many images never before published. For instance, reproductions of Academy Award-winning production designs by Herman Rosse “will form the backbone of the book.” 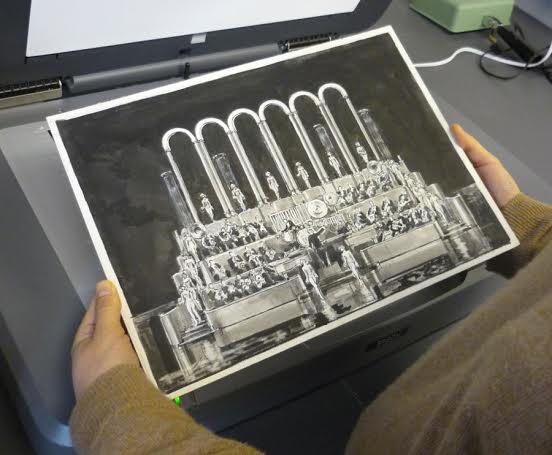 Scanning one of Rosse’s production designs for the upcoming book…

…and the design as it appeared in the film.

Layton and Pierce’s research is shedding light on how early talkie Hollywood continued to produce for foreign markets. Remember the Spanish-language Dracula? Well, Universal simultaneously produced 9—NINE—foreign versions of King of Jazz! Alas, all of these except the French version (preserved at the Gosfilmofond in Russia) are lost.

A still for “Il re del jazz,” the lost Italian version of “King of Jazz.”

The studio chose a veritable “It’s a Small World After All”-worthy crew of international actors working in Hollywood to serve as hosts for audiences in foreign countries.

And, if you’re interested in how audiences from Portugal to Japan responded to this surreal riot of Art Deco pop culture—translated into their native tongues—the book will cover that, too. “We worked closely with Gosfilmofond, the Czech national film archive, Museo del cinema in Turin, the Swedish Film Institute, and a host of international film researchers to translate original articles from international newspapers and magazines.”

I asked Layton if he’d uncovered anything else surprising about King of Jazz. He explained, “One of the most eye-opening moments early on in our research was the realization that a lot of the musical numbers were not new to the film; they had been honed on the Broadway and vaudeville stage throughout the 1920s, and were then re-imagined for motion pictures by visionary director John Murray Anderson.”

Indeed, King of Jazz strikes me as a thrillingly transitional film, sometimes bound to stage conventions, but more often innovative and cinematic, breaking out into an impossibly fluid space. For instance, the musical number “It Happened in Monterey” uses the potential of cinematic space to conjure up a nostalgic past.

The sequence’s “protagonist” (golden-voiced John Boles) starts out singing about his lost love while looking at her portrait in a small, confined room. The camera tracks in towards the painting—which dissolves into the subject of the portrait (Jeanette Loff)—then camera moves out to reveal a vast, romantic stylized vision of old Monterey. 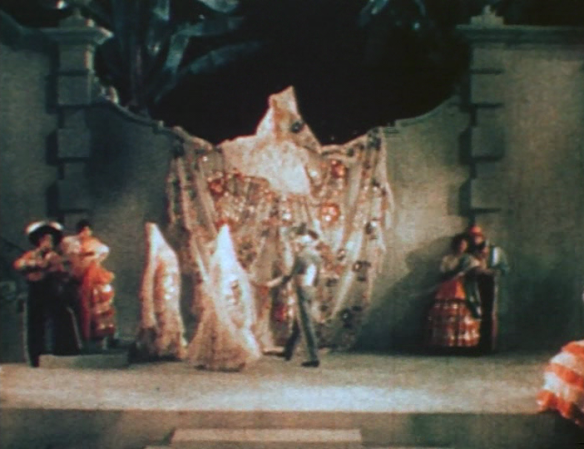 Sure, you’ll get wide shots of kicklines, as though you were plunked in the audience of a big Broadway theater. Yet, you’ll also get ethereal double exposures, oodles of tracking and crane shots, passages of fast, rhythmic editing, and animated musical interludes, all drenched in the psychedelic glory of early Technicolor.

My favorite shot of the film comes during the“Rhapsody in Blue” sequence, probably the best-known portion of the film, thanks to its giant piano and top-hatted Russell Markert dancers (a troupe we now know as the Rockettes). Yet, amidst all that extravagance, the image that lingers in my mind is this shot of a clarinetist.

This low angle brings us into the intimacy of the performance and gives us a perspective that we’d be unlikely to encounter in real life. Towering against the glittering blue background, the clarinet player takes on the power of a shaman, channelling the magic of jazz into a new era of audiovisual stimulation.

In a similar vein, look at this overhead shot of the violins section in Whiteman’s orchestra. 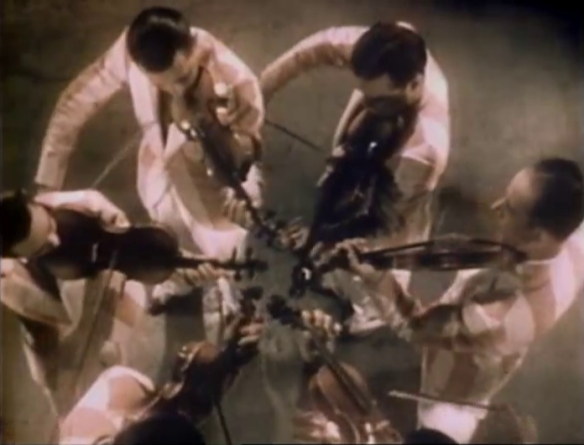 I know what you’re thinking: it looks sort of Busby Berkeley, right? Well, King of Jazz hit theaters in the spring of 1930. And Whoopee!, the first film on which Berkeley worked as a dance director, premiered in New York City on September 30 of the same year.

King of Jazz is both a rip-roaring good time and a key film in the development of the musical as a genre. And for many years it’s been something of a “missing link.” I look forward to learning more about it.

For more information about Layton and Pierce’s new book, check out their Kickstarter and consider backing it. Support film scholarship! 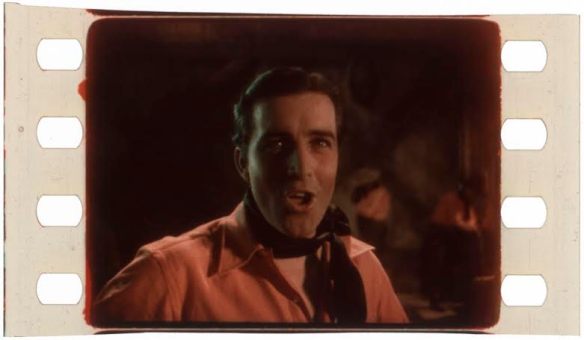 Now, you might be wondering, how can cinephiles see the restoration? Well, I’ve got more good news.

The restored King of Jazz will premiere at MoMA as part of upcoming series focusing on Universal’s years under the reign of Junior Laemmle.

Often ridiculed as a brash baby mogul, Junior received studio control in 1929 as a 21st birthday gift from his father, Universal founder Carl Laemmle. (And you thought My Super Sweet 16 was wild!) However, Junior’s term as general manager bequeathed to us some of the greatest and most enduring films of the 1930s, including Universal’s cycle of horror films, All Quiet on the Western Front, and the 1934 adaptation of Imitation of Life.

Junior’s contributions to film history, especially during the no-holds-barred pre-Code era, deserve wider recognition. (Even if he did allegedly think that Bette Davis had the sex appeal of Slim Summerville. We all make mistakes.)

According to Layton, the Junior Laemmle series, programmed by Dave Kehr, “will include premieres of many new restorations and preservations from Universal’s restoration department.” MoMA will announce dates soon.

(And here’s hoping that these dazzling restorations will make it onto DVD and/or Blu-ray. Seriously, Universal, don’t make me publicly rail against your home release record. Again.)

If you can’t make the MoMA series, may I interest you in Capitolfest?

This festival screens rare silents and pre-Codes in a 1928 Moorish style movie palace. Believe me, it’s even better than it sounds. King of Jazz poses a special challenge.

As Capitolfest’s Facebook page reports, “unfortunately, there will be no FILM prints [of King of Jazz]. There will be a DCP (digital) print available, however, though we are not equipped to show this at the Capitol. And so, we have decided to show this as our regular weekly attraction at one of the small cinemas next door to the Capitol, from August 11-15.” 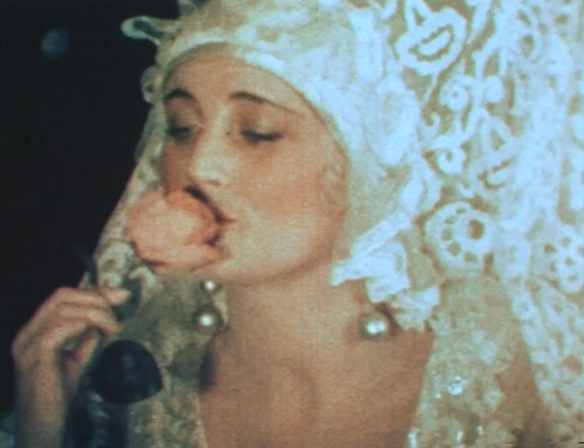 When it comes to restorations, I usually only see the “after” in the “before and after” process. Having witnessed the wan, chopped-up King of Jazz, I’m especially excited to discover the restoration. I’ll get to observe not only the changes in the film, but also the changes in my reactions to it.

My pal Will McKinley of Cinematically Insane has also written about the restoration and done a great interview with James Layton. Highly recommended reading!