He had never seen her before, but he knew on sight that she was something mysterious, unattainable, and lovely.

He longed to understand her and couldn’t help edging a little closer.

And so Buster’s onscreen love affair with the movie camera begins—almost identically to his mega-crush on Sally, who happens to work at the M-G-M Newsreel Office. Upon “meeting” both Sally and a newsreel camera, he proceeds the same way, with boyish simplicity and joy in discovery, snuggling up to of them without a thought for what others might perceive as weirdness. Just as Buster can’t resist plunging his face into Sally’s hair and inhaling deeply, he sticks his head right inside the chamber of the first professional newsreel camera he gets the chance to examine. 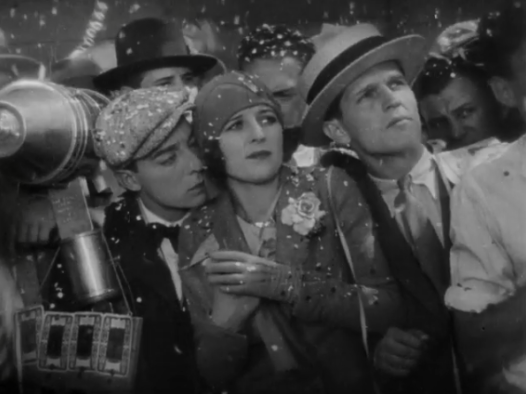 He nuzzles the woman and the camera in much the same way, knowing instinctively that the mechanical device which so many of us see as cold and exacting is, in fact, a fascinating creature with as many secrets as a beautiful woman. Admittedly, the camera Buster explores in the newsreel office is a different from the one that becomes his loyal companion, a mangy early Pathé camera that needs to be hand cranked. Nevertheless, his childlike affection for the device in general is telling and utterly charming. 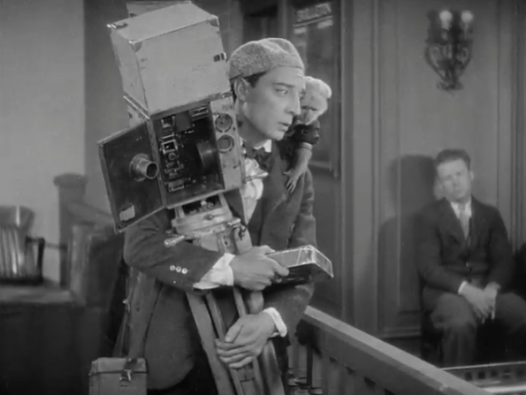 The film originally ended with Buster abandoning the camera in a Chinatown scrape. He previewed the sequence and it “died the death of a dog. It dawned on us what that was. I deserted that camera. So I had to go back and remake that—even with the trouble of trying to get away… I still kept my camera. Then it was all right.”  Throughout the perilous Chinatown tussle, Buster gallantly totes his battered camera around as he usually carries damsels in distress, hugging her to his body when the bad guys corner them. The romantic bond between Buster and his camera must never be undermined, otherwise the whole film would come crashing down.

Buster’s onscreen love of the camera as a being, an almost personified toy that brings him closer to his dream girl, reflects his real-life appreciation of this mystical doohickey. No sooner did Buster start his film career than he borrowed a camera, took it apart, and put it back together again: “One of the first things I did was tear a motion picture camera practically to pieces and found out [about] the lenses and the splicing of film and how to run it on the projector.” The potential of the device immediately struck him; he grasped the boundless scale of what a camera could put before viewers, compared to the cramped artifice of a stage.

And because Buster, real and fictionalized, loves his camera, the camera loves him, takes pity on him, and comes forth to bear witness to his courage when he needs it most.

As a movie about movies—or, to be precise, about the video journalism of newsreels—The Cameraman blissfully shatters all of our notions about the boundaries between fact and fiction. Really, it’s a movie that messes with your head in the best possible sense. I mean, by the end, we’re watching people watching Buster Keaton in a movie… within a Buster Keaton movie. Thanks to its dizzying mise-en-abyme conclusion, much of The Cameraman’s most enduring humor and pathos resides in its ability to hint at what it means to film something, to preserve reality and then to play it back.

For instance, during the climactic Tong War in Chinatown, Buster’s antics reveal the extent to which “documentary” footage often benefits from a little creative staging. Buster, caught in the thick of it, seizes on the opportunity to embellish what’s happening all around him. Watching two men wrestling on the ground, trying to reach a knife, Buster drops them the knife and then cranks away, recording the now slightly more dramatic fight.

Once holed up in a dry goods store, he positions his camera in the window and chucks a few light bulbs down on the squabbling gangsters below to stir the fight up a bit more, all in the sake of a better shot. We recognize that the newsreel cameraman is never a passive entity, a dumb witness to events. Merely by choosing what to record and how to record it, what to show and what exclude, he discerns value and importance out of a world of noise. And, as Buster shows, these early video journalists didn’t baulk at stooping to a little directing, as well. 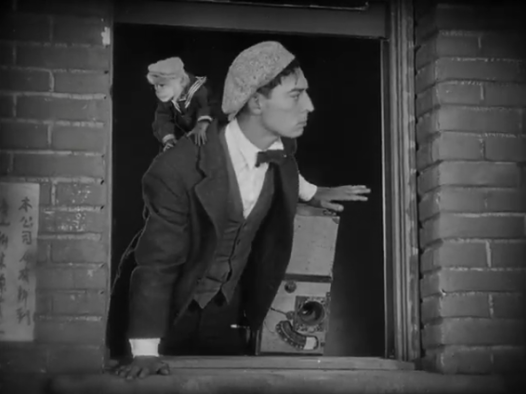 I’ll bet audiences left The Cameraman feeling a bit more wary of newsreel truth, seeing how those daring young men with their filming machines sometimes enhanced the action. Rearranging or even totally restaging historical events wasn’t unheard of for news coverage… and it still isn’t! Here I’m reminded of the famous Civil War photographs of Matthew Brady, so celebrated for their rawness and authenticity… when, in fact, his assistants arranged the corpses for better compositions. Does that make the photographs less truthful? Perhaps. But nobody cares about the truth if it’s not interesting. 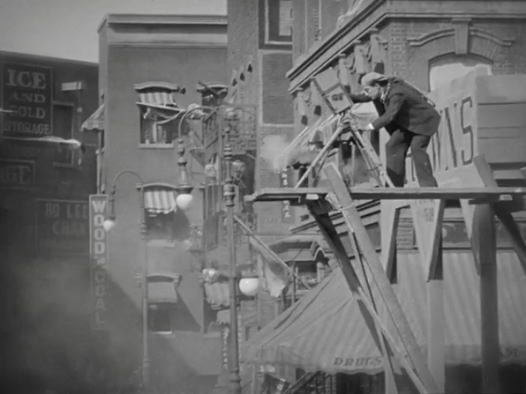 The screening of the Chinatown footage vindicates Buster’s deft management of the situation. Every thrilling shot explodes with danger and conflict. The chief of the M-G-M Newsreel Office even exclaims, “That’s the best camera work I’ve seen in years!” As we watch the footage, we chuckle, however, because we recognize Buster’s handiwork. We see the situation twice—first as a movie, with Buster present as the protagonist, and secondly as a newsreel, with Buster’s presence and influence subtly permeating each frame.

The humor that arises from this doubling of perspective impresses me with its complexity. The Cameraman abounds with delicious pratfalls, gags, and physical comedy, including the famous get-a-load-of-Buster’s-abs dressing room sequence followed by the nude swimming pool scene. 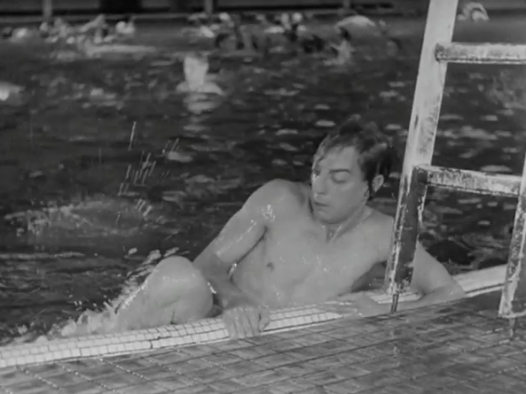 In My Wonderful World of Slapstick, Buster remembered that the film received one of its biggest laughs during the scene where the wet-behind-the-ears cameraman watches his film being previewed for the newsreel crew. The trial goes hopelessly badly, because the reel of film that the newbie took consists of a series of hilarious double exposures and trick shots. Battleships float through New York, stunt divers flip backwards out of the water, and city streets jumble together in an impossible collage of mayhem. 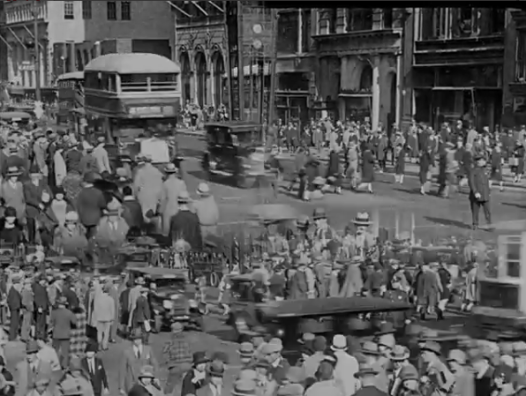 Of course, what cracks me up about this scene is that his footage looks scarily like the montage documentary opus Man with a Movie Camera, which features a plethora of impressive yet playful superimpositions. See? Buster’s not incompetent! He’s a prodigy. He’s a natural Dziga Vertov, for crying out loud! Amusingly, what doesn’t cut it for the newsreels actually makes for splendid art—and for a hearty laugh. 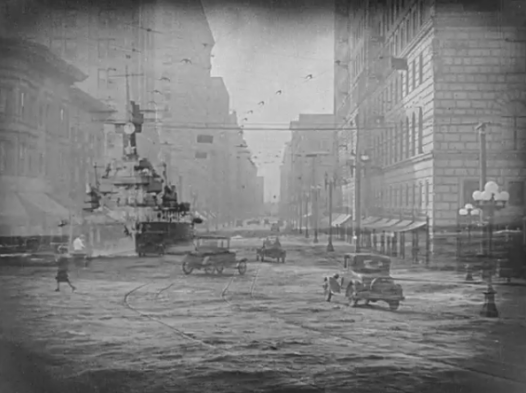 Although the film was mostly made at a studio, it does include some genuine newsreel footage, like the shot of Charles Lindberg that punctuates its conclusion. The archive shot serves a clear narrative purpose, explaining the reason for the parade Buster gets caught up in, which he thinks is in his honor—and also adds a strong emotional reaction to the scene. 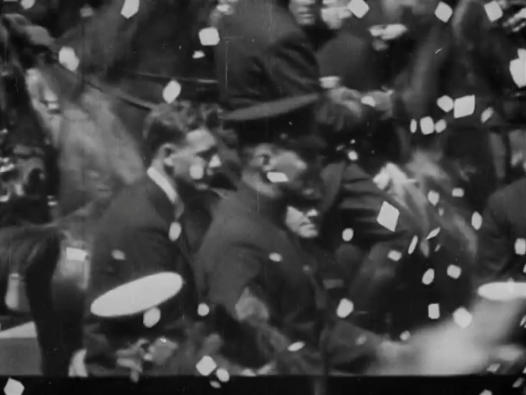 No American in 1928 could’ve looked at that shot and not been filled with pride and joy. This documentary image, plucked from the Hearst files, serves an expressive purpose in the context of a fictional narrative. Lindberg’s real-life triumph—and he was Superman in the 1920s—echoes Buster’s smaller victory, and the inclusion of reality bolsters the fiction.

Plus, Buster’s confusion, mistakenly believing that the swelling ticker-tape parade is celebrating him, parallels the mix-up created by seeing newsreel footage of Lucky Lindy embedded in a fictional storyline. We get a whole bundle of conflicting things to laugh about. Buster thinks he’s the protagonist in the newsreel reality of the diegesis, but he’s not. However, in the reality of The Cameraman, he is, of course, the protagonist.

The fact that a movie about newsreels returns to actual newsreel footage at the end makes us feel that the whole film has coiled up on itself. Buster never quite lets us free of this movie, trapping us in a Möbius strip of irony to the end. Was this a fiction with a detour through newsreels… or a newsreel with an extended detour through fiction?

Buster’s adventures cross over so serendipitously with actual historical events—even if the documentary footage component makes up only a few feet of film among thousands of studio-shot illusion. His journey, especially the wish fulfillment conclusion, recalls the way we bump into our favorite films and half imagine ourselves to be the protagonists. 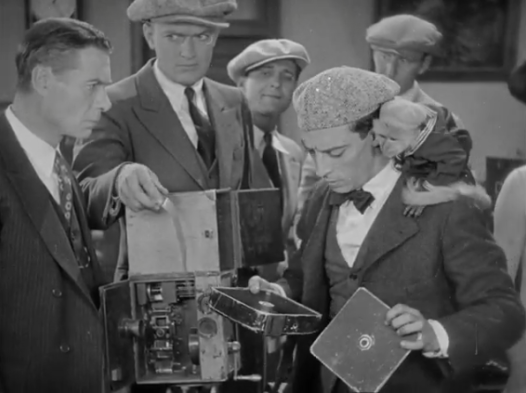 What is and is not recorded on camera also interjects some of the saddest moments of The Cameraman—and some of the saddest moments of any comedy I’ve seen! When Buster returns from his death-defying mission to Chinatown only to discover that he forgot to put film in the camera, the emptiness of the reel makes our hearts sink. Not only has he utterly failed as the newsreel journalist he longs to be, but he literally lost the thing that he tried so hard to protect. The fruit of his labor, the thing that he valued above his own safety, suddenly dematerialized. Such is the nature of film.

When Buster rescues the girl and goes to get something to revive her, he returns to find her walking away with another man. As our hero sinks to his knees, the camera slowly slides away from him… showing his own camera a few yards away, still being cranked by Josephine the monkey. 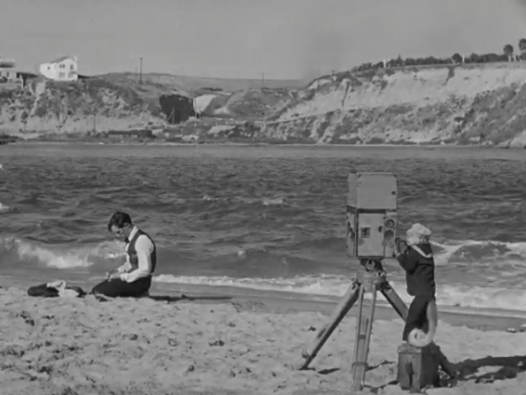 It’s hard to put into words what that devastating tracking shot conveys. As Buster watches, the young lovers walk away, and his heart breaks, like an intruder in somebody else’s movie, a conventional romantic comedy. I suppose that seeing the camera jerks us out of the film world and forces us to take a moment of silent reverence for the suffering that Buster undergoes for the sake of our belly laughs. The sudden appearance of that implacable camera shocks us and strips away the escapism of comedy. 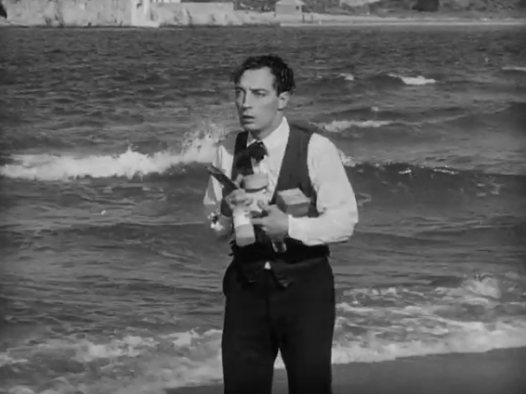 However, on a deeper level, the absurdity of a camera capturing the depths of his despair, of memorializing a moment he’ll always remember with a tiny throb of anguish, drives home the loneliness of the experience. I mean, what if someone videotaped the worst moment of your life? Pretty harsh. His only companion (besides the monkey) is that helpless three-legged beast, the camera. And she can’t understand what he’s going through… or can she? Perhaps she can make his isolation shine. After all, that sublime tracking shot sure does. That complex shot is every bit the equivalent of the ending shot of Chaplin’s City Lights, in my humble opinion—that one shot that tells you everything you need to know about the wistfulness at the heart of this little man we find so funny. 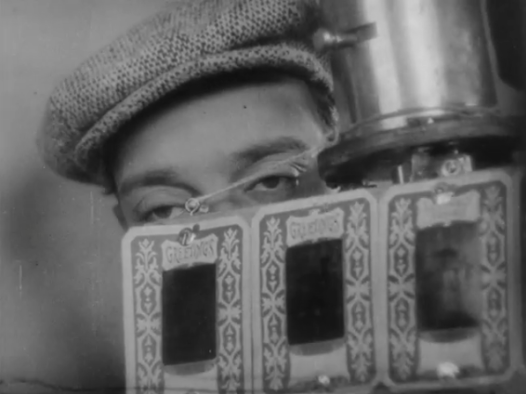 Fortunately, the camera that can be cruel is also kind, because the miraculously rediscovered footage comes to testify in Buster’s behalf. The camera sees his melancholy beauty just as it sees the news, when it’s fed the right subject, recontextualizing life and making it amazing again. A deus ex machina, a benevolent god from the machine, film itself—or rather the film within the film—furnishes the happy ending we all crave.

This post is part of the Journalism in Classic Film Blogathon, hosted by Comet Over Hollywood and Lindsay’s Movie Musings. Please check out the other fabulous entries! 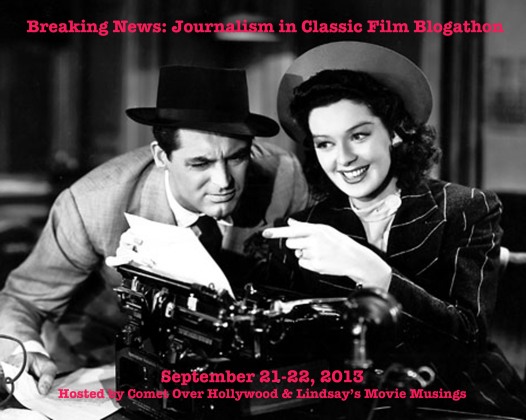 Oh, and you didn’t think I’d end the post without this, did you? One of these men is Buster Keaton. Guess which.