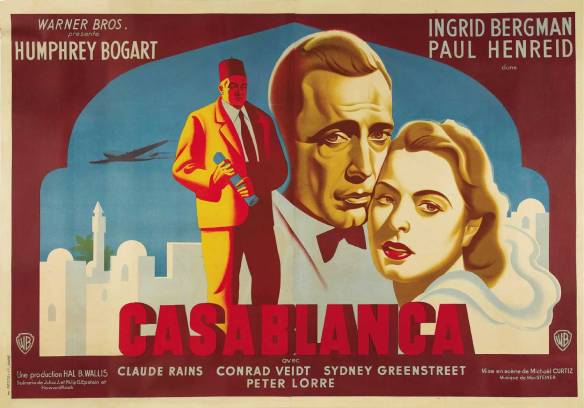 So many people have written mind-blowing thematic analyses of Casablanca that I decided to go another route. This movie invites you into it—and invites you to take souvenirs from it: favorite lines, cherished scenes, fragments of tunes and soundtrack music, and, of course, images.

Casablanca encourages you to turn it into your own personal collection of memories and does so more successfully than any other Hollywood film. So here’s my collection of its most meaningful, mythical, and tantalizing shots.

If you were to show me this shot and say, “What’s it from?” it would take me more than a minute to realize that it’s from The Greatest Hollywood Movie of All Time (according to some people, though I don’t like those kinds of judgements). Here, Ilsa is watching Victor as he risks his life by going out to the Free France meeting after curfew. The low-key lighting, the venetian blinds, and the obscured face all scream NOIR.  The image clearly plays with our genre-recognition abilities. This noirish quality, largely thanks to expressionist-influenced director Michael Curtiz and director of photography Arthur Edeson (also the DoP for Frankenstein and The Maltese Falcon) consistently add a palpable ominousness to what could’ve been a frothy, unbelievable quip-fest. 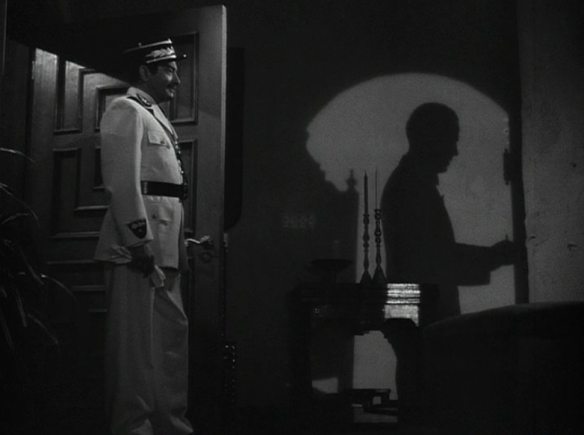 Now, this isn’t a shot that slaps you across the face with its importance. It occurs very early in the film when Captain Renault warns Rick not to help Lazlo. The shot doesn’t last particularly long. However, I think this moody shadow silhouette of Rick serves a key function of insisting on his dark side… the dark side that we’re about to see when he coldly watches the Nazis nab Ugarte. This film only works if we believe that Bogie (who, leading up to Casablanca, had played some pretty vicious guys) might actually let Victor Lazlo die because of a grudge against Ilsa. That ugliness needs to lurk in him to counterbalance the sentimentality. And this shot knows it.

We all know the famous two-shot of Rick and Ilsa saying goodbye, but there’s a marvelous swooping crane-in movement on the pair which we would also do well to recall with fondness. It adds to the shock, tension, and pathos of Rick’s noble switcheroo as Ilsa copes with the fact that she’s going, not staying.

7. The Nazis are Coming

How brave was it, in 1942, to include a shot like this? Raw, grainy, obviously the real deal, and totally terrifying. Not only does this footage of a genuine Panzer division ripping through the French countryside lend psychological weight and menace to Conrad Veidt’s sinister Major Strasser, but it’s also the scariest shot in the film, for my money, because it reaches beyond the diegesis to frighten us. For the people watching this in 1942, it might have felt like a coming attraction. And not a pleasant one. As Strasser asks Rick, can you imagine the Nazis in New York? I bet Casablanca‘s audiences could, in their nightmares.

How many times have we seen letters in movies as a short-hand for plot revelations? And how often does it feel flat and lame? Well, apparently, just add (rain)water and the ink bleeds and weeps into instant devastation. The words cry the tears that tough-guy Bogie can’t and infuse the scene with an ineffable feeling of loss and things falling apart.

Ilsa tries to enjoy her last moments with Rick, but this tight framing tells us that some mysterious inner struggle is killing her. It’s pure agony and irony—since Rick blithely has no idea. The Paris dream is about to come crashing down.

(Note: Nick Ray would later copy this tight framing for the nightclub scene in In A Lonely Place, again, with Bogie, but it’s much more effective here, I’d argue.)

The beam scans the night sky as peaceful harps sing on the soundtrack, telling us what really happened between Rick and Ilsa. As Rick later admits to Laslzo, “She pretended she was still in love with me… and I let her pretend…” One of the most alluring, evocative ellipses of all time. Thanks, Joseph Breen and your blue-pencil brigade, for being a real pain and burning this remarkable hole in the narrative! 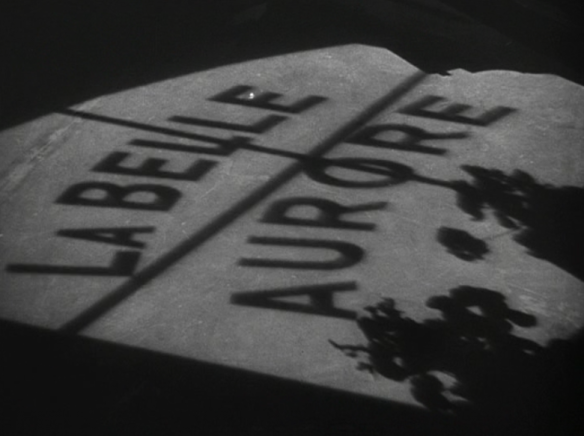 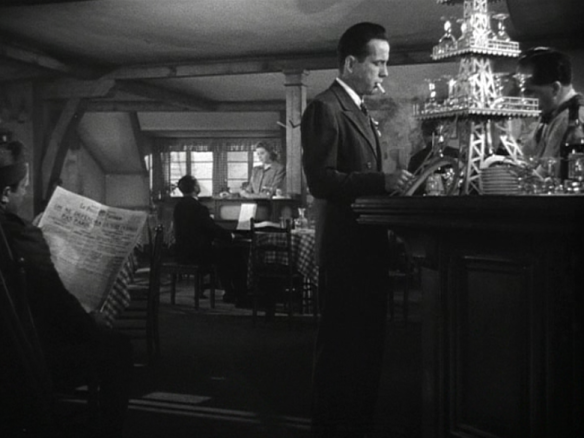 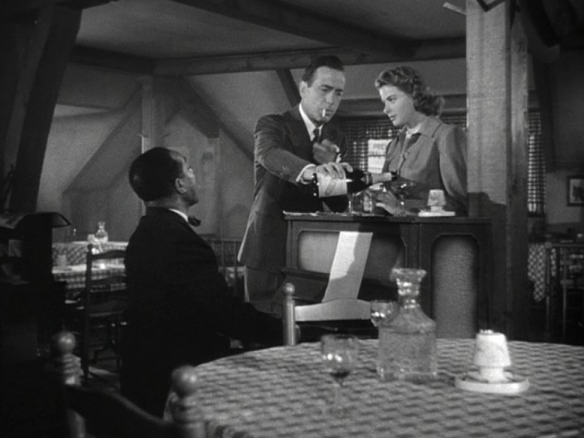 One shot encompasses all of the frames above. We get a tilt up from the shadow. Rick’s at the bar. A dolly movement follows him over to the piano. He pours some champagne as Sam plays the then-untainted “As Time Goes By.” Instant nostalgia.

Do you ever have a memory where you see yourself? Like you’re watching a movie of your past in your mind? Then you think, “Wait, I can’t see myself in real life. I must be embellishing this…” This lyrical long take captures that sensation of a romanticized remembrance, colored and enhanced by longing. Nothing could ever be this perfect and beautiful and romantic. But, then again, it’s broadcast to you from the mind of a drunk, lonely saloon owner. Of course it will look pure, friendly, intimate, and untouchable—the antithesis of his own saloon. 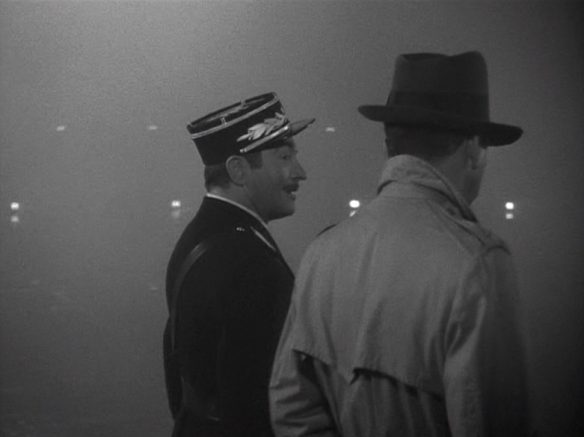 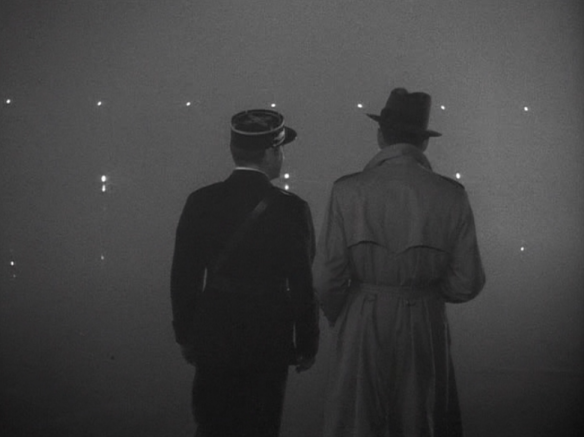 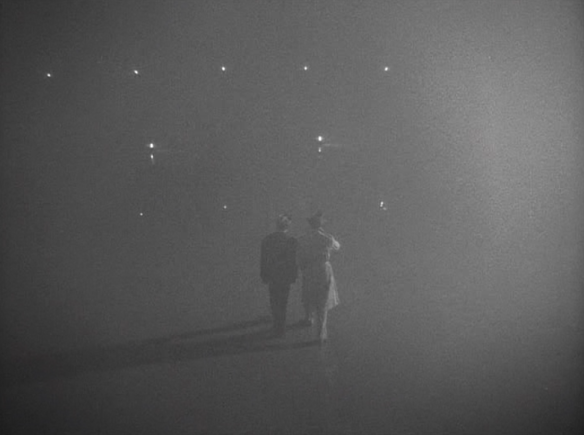 This crane shot contains the paradox of Casablanca. How can I be a good person, one who cares for others and, if necessary, makes sacrifices for them, and still be an individual instead of another senseless follower? Won’t my drama get lost in the drama of a world in crisis? As the shot rises, Rick and Louis look small, but their voices stay more or less the same. No matter how immersed they are in the tide of history, the force of their personalities, their desires, and the uniqueness of their goodwill gestures maintains their integrity as characters.

Integrity has many forms and many representatives, including venal bureaucrats and sad-eyed bar owners—idealized Lazlo isn’t the only option. You don’t have to lead the Resistance to stand out in a sea of change, we realize, as Rick and Louis walk down the runway mist which shimmers around them like a starry firmament.

It really is true. No matter how many times you watch Casablanca you discover some clever detail that you hadn’t noticed before. Just before this shot, Victor shows up at Rick’s and Ilsa is hiding in Rick’s room. Now, as much as I admire Ilsa’s spirit and decency, I confess that, as a character, she annoys me personally. It took this image to set her free in my mind. Because here she’s doubled, split, divided.

This image translates the forked path of destiny, so central to Casablanca, a movie about not just one choice, but many choices. It’s a tale of possibilities and “what-ifs,” and therein lies the key to its beauty and resonance.

Casablanca is a story that doesn’t know its own ending. In my opinion, that is why it is such a great story.

Now, I know that the claims that the cast were kept in the dark as to the dénouement practically until they filmed it (because the screenwriters were scrambling to wrap it up) have been exaggerated. Nevertheless, even the characters persistently talk about this up-in-the-air conclusion. “Does it have a wild finish?” asks the nasty, inebriated Rick. “It’s still a story without an ending,” he later observes to Ilsa. In that scene, when she comes for the letters of transit, they finally unburden themselves of their misunderstandings by figuring out the exact chronology of their own story.

Without the slightest bit of “meta” cynicism, Casablanca manages to unravel the complications of storytelling—not in an artistic sense, but in a human one. The fact that Warner Brothers produced it during the war means that, of course, the entire world had to agree with Rick: “It’s still a story without an ending.” The epic of World War II wasn’t over yet. But, then again, when is anything really over? Even Casablanca’s ending is a beginning and the characters’ relationships open all kinds of room for our imaginations to fill in the time before the beginning of film. Still, on an even more universal level, Casablanca touches the viewers by reminding us of all of the loose ends in our own lives.

Casablanca endures because it dwells in these big little questions. What’s going to happen to me? Will we always be together? What will the future bring? How are we to make sense of all the encounters and losses that life sets, like landmines, in our path? Nobody knows the way it’s going to be.

Those twin visions of Ilsa peering at us suggest that every reality is teetering on the brink of not one, but several futures, several possible endings. And we don’t know which until it happens.

Because, really, I’m a little screenshot-happy. What movie blogger wouldn’t be?

Every time I think about this film, this long sweep over the huddled masses, gazing upward towards the plane, sticks out in my memory. The fatigued faces and the hope in their eyes reminds me of the American immigrant experience and, within the story, suggests the stakes of getting the Hell out of Casablanca. This shot also tells us of a multitude of stories that we won’t have time to hear in this film, but which are just as valid, poignant, and personal. Casablanca is not an egocentric film. It realizes that for every story told, there are millions more worth listening to.

Everybody Goes to Rick’s

In those first shots of the nightclub a whole era of between-the-wars escapism comes alive. The textures, the smoke haze, the silky gowns, the pierced, lacy screens, as though to filter out the harsh light of truth—it’s all there, inviting and numbing.

One of the best character introductions of all time. Champagne cocktail = sophisticated, drinker. Cigarette = cool. Chessboard = thinker. Alone = lonely. Shadowy background = noirish badass with a knack for decorating. Any questions?

When Rick sees Ilsa for the first time in Casablanca, we get a few very overwrought close-ups. If we had to linger in their reunion, the scene would descend into bathos. Fortunately, Lazlo and Renault arrive—and the tension is palpable as the four of them crowd this shot with their worries and surprise. It’s gonna be a bumpy night. 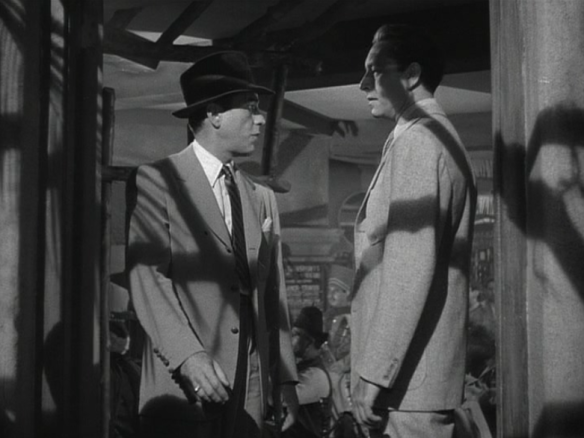 Rick and Lazlo bump into each other in the doorway of the Blue Parrot… as the shadow of a belly dancer’s arm undulates over them as a reminder of the love versus lust aspect of the plot.

Umm… did I miss something? Did my DVD cut to Double Indemnity? In all seriousness, this indelible shot drives home the risk of losing one’s humanity to war—even far from the battlefield. If Ilsa shot Rick, she would be just as bad as Major Strasser.

Okay, maybe not quite, but you see my point. According to the logic of this film, you can’t fight for principles by abandoning all principles. Ilsa can’t bring herself to shoot Rick, which is why she does triumph. She’s still human. She’s still filled with love for Rick, love that reminds him of his own humanity, of that time before his insides got kicked out. However, she comes mighty close to pulling that trigger—which allows Curtiz to show us that war is indeed Hell. Divided loyalties turn almost every relationship into a noirish collision course.

Escape and loss, relief and regret—inscribed on the image. It will haunt my dreams. I’m sure that it’s haunted dreams for 70 years. And will do so for many more as time goes by.