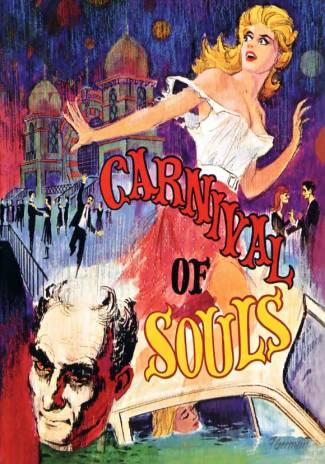 The first time I watched Carnival of Souls, I was planning to make fun of it.

I soon found out that it was no laughing matter.

I had borrowed a DVD of this Public Domain film with a humorous commentary track by the Rifftrax guys (whom you might know best as Crow, Servo, and Mike from Mystery Science Theater 3000). These fellows routinely lampoon atrocious B-movies and deliver the kind of cathartic belly laughs that sustain me through this drab existence. So, I popped Carnival of Souls in and braced myself for an evening of comedy.

CUT TO: me, lying awake that night in cold sweats. Serves me right for wanting to dismiss a cult classic.

While watching the movie, I didn’t even crack a smile. I can’t remember a single joke the Rifftrax boys made. I write that not as an insult to those talented comedians, but rather as an homage to the sublime creepiness of Carnival of Souls. Something about this film shoots you through will a chill that you can’t shake. I mean, I watch a lot of horror films, new and old, and while many have disgusted or disturbed me, few have actually scared me. This is one of them.

Directed by Herk Harvey, an industrial filmmaker on vacation (who also played the chief ghost), this ambitious indie horror film yanked me into its vertiginous parallel universe. Despite my initial inclination to denigrate the low budget masterpiece, Carnival of Souls immediately impressed me with its stark cinematography. Harvey adroitly manipulated lighting and camera angles to conjure an oppressive sense of doom closing in. 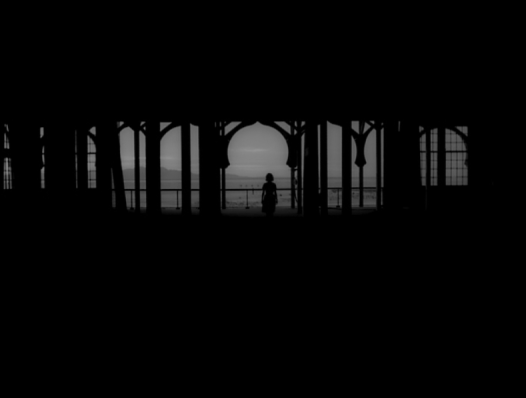 For instance, in the scene where Mary Henry, presumed dead, staggers out of a riverbed to the astonishment of onlookers, the screen floods with an atmosphere of the uncanny. We know, from the way the sequence is shot, that this woman belongs dead. As Mary stands on the edge of a sandbar, jutting out into the rapidly moving waters, almost an abstracted geometrical form, the world around her seems separate. Open space crowds her. 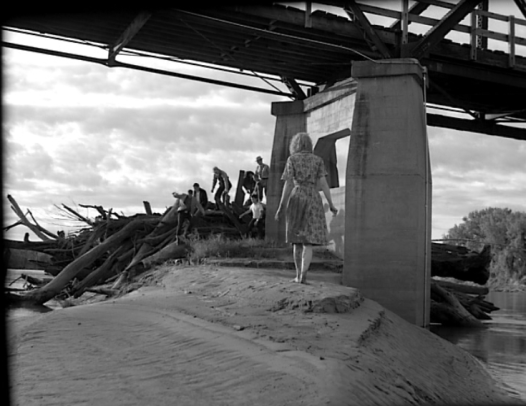 Bystanders scramble down from a bridge to meet her, but we see them as tiny, pointless figures, even more dwarfed than Mary. Trauma is etched on these deep focus images that visually convey and anticipate the truth of that famous Toni Morrison line from Beloved, “Anything dead coming back to life hurts.”

Carnival of Souls offers many flourishes of unexpected creativity. On a recent rewatching, I noticed how Mary Henry, gazing down at the site of the accident, resembles a ship masthead figure, her Baroque 1960s ’do blown back and lit from below like a waxworks. 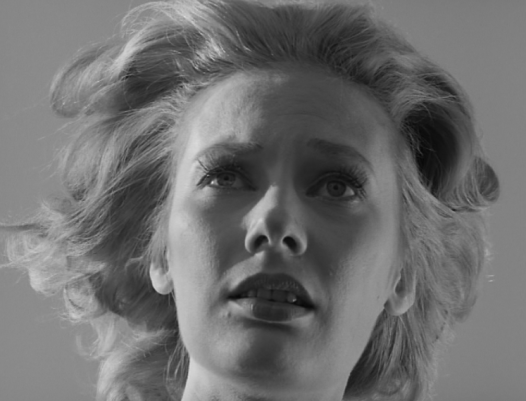 As she reaches for her car ignition, we get a sort of trick match-on-action to her pulling out the stops on an organ. The fluid transition from the interior of her car to the somber beauty of an organ showroom reveals a great deal about her character. Even if the script didn’t clunkily inform us that Mary can’t “put [her] soul” into her career as a church organist, her detachment speaks to us through that false match cut.

Mary’s visits to the abandoned amusement park wound us with their irony. For instance, her taut, worried face pointedly contrasts with the sensual pin-up girl on a poster. The grids of fences, lattices of shadow, tangles of streamers, and exotic pavilion-style architectural forms combine to create a shifting funhouse of suspense. 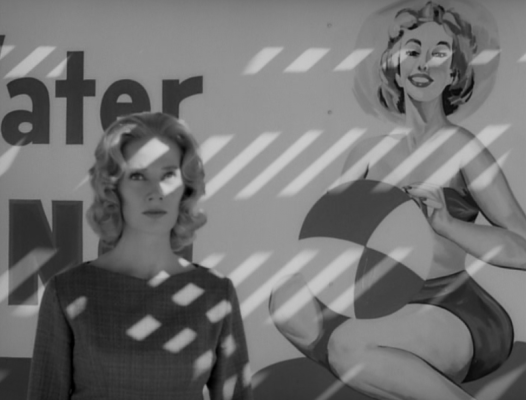 In this movie of eerie silence, I detect a certain homage to silent films, especially when that silence begins to invade the usually bustling daytime world. However, we also see that link with silent films through the use of locations associated with iconic Roaring Twenties amusements. The tawdry dance halls and rotating tumbling cylinders of pre-talkie rom-coms appear as melancholy, strange relics that fragment the screen with disjointed shapes.

At the risk of sounding rather grim (in contrast to my usual perky self), Carnival of Souls frightens me because it suggests that perhaps in the midst of life we are all actually dead. And that death, far from the state of peaceful repose or blissful ascension we might hope for, is a restless, ashen whirl of numbness.

Above: Mary with her oily date. Below: Mary in the arms of a ghoul.

The ever-circling ghouls of the condemned carnival aren’t so different from the living who plod forward in the compulsive pursuit of pleasureless things that they crave only because they’re told to want them. In fact, Mary only demonstrates any real passion in the scene where visions of ghosts torment her; as she practices the organ, she slips into a montage of dissociation. The first time she plays “with soul,” she gets castigated for blasphemy and fired! Paradoxically, it’s contact with the dead that can make her come to life.

Why else select an abandoned amusement park, the real-life resort pavilion at Saltair, as the locus of terror? Deserted places of recreation possess an aura which unsettles me more than memorials to some tragedy or other. We brace ourselves for the presence of death in locations scarred by suffering and, thus armed, can sometimes emerge unscathed and unmoved. However, the ruins of a place that once echoed with laughter and joy remind us of the predestined end to all our amusements. The knowledge that sorrow could last forever haunts us less than the realization that pleasure (or a reasonable facsimile) doesn’t last very long at all.

Director Herk Harvey explained that he wanted to make a movie in the art house vein, citing Bresson and Bergman as influences. Indeed, like a lot of European art films made around the same time, Carnival of Souls works at digesting the gristly concept of alienation. This film scares us on a metaphysical level; its shocks are not of the “Boo!” ilk alone. Instead it jolts us into an heightened awareness of everyday isolation, of the futility and awkwardness of “normal” human interactions. 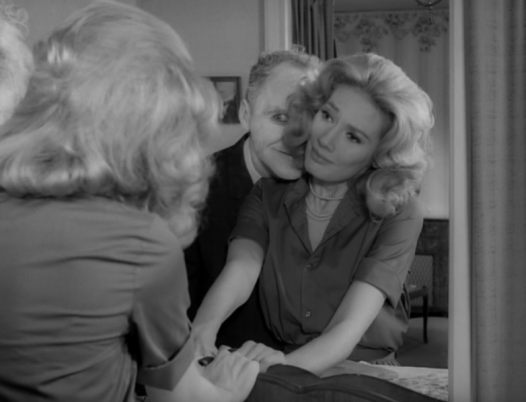 When we look into the grotesque chalky faces of the undead, we’re not as horrified by them as we are by the possibility that we might see our own faces among them. 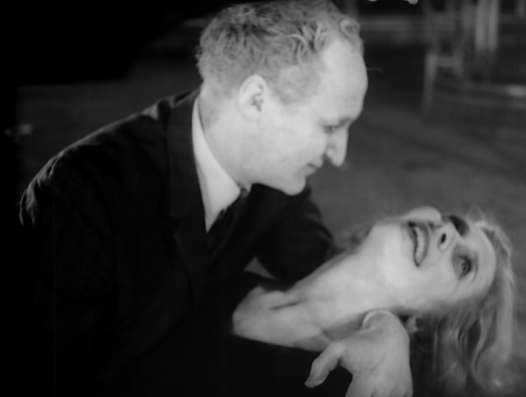 Carnival of Souls may strike modern viewers as somewhat tame. However, if you sit back and let it wash over you with an open mind, I think it’ll strike a chord with almost anyone. The piercing organ score, the blanched, smeary faces of the phantoms, the contamination of ordinary locations, and the depiction of destiny as a kind of cosmic Chinese finger trap will eat away at you. When you’re in a church at night. When you’re out shopping. When you’re driving down a lonely highway. When you’re somewhere that connects you to the past.

Even if you want, as I did, to chuckle at Carnival of Souls, I suspect that its coven of ghouls will have the last laugh.

Carnival of Souls is in the Public Domain, so you can watch it on YouTube or download it for free at the Internet Archive. Enjoy!