Every film buff has his or her pet candidate for the Greatest Movie Never Made, from Sergei Eisenstein’s aborted An American Tragedy to Buster Keaton’s proposed Grand Hotel send-up to Sergio Leone’s dream of a Gone with the Wind remake.

These ghostly might-have-been films haunt us, tantalizing the director of the mind that lurks within all cinephiles. The impossible possibilities dare us to imagine them, to make the movie in our heads, despite the knowledge that such a thought experiment will doubtless result in more pain than pleasure.

But what exquisite agony it is to imagine!

I am fortunate in my chimera of choice, because a morsel of the project was realized and survives as a clip that every lover of cinema, of Shakespeare, or of great acting needs to see.

Now, I’d get myself into a hell of a fight if I asserted that John Barrymore was the greatest Hamlet of the 20th century, so, to be diplomatic, I’ll just argue that he was one of the greatest Hamlets of all time. The waggish among you might make a crack about borrowing my time machine, because—duh—I’ve never seen Barrymore perform Hamlet onstage. 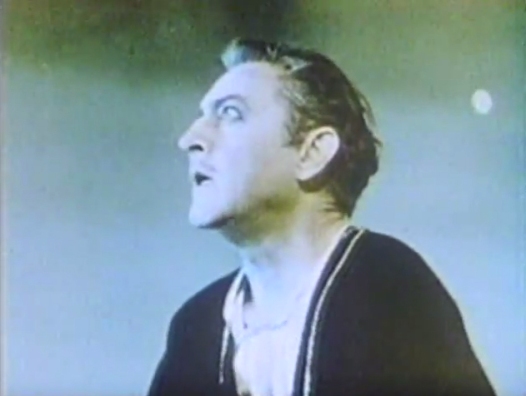 Instead I base this praise on two short fragments: one is a bitterly ironic clip from a show biz parody, the other from a rare screen test for a film that never materialized. To tell the full story of what makes that masterpiece manqué so poignant, I need to make a few detours through the story of an extraordinary life.

In the film Twentieth Century, Barrymore, playing hammy Broadway producer Oscar Jaffe, castigates his protégée for working in Hollywood: “Those movies you were in! It’s sacrilege throwing you away on things like that. When I left that movie house, I felt some magnificent ruby had been thrown into a platter of lard.” One has a similar feeling 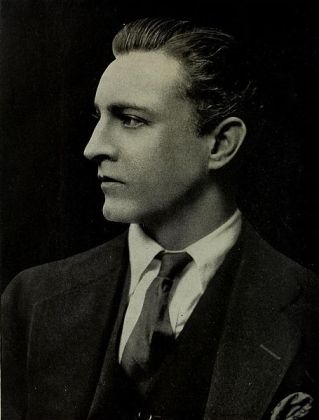 watching much of Barrymore’s filmography.

Attracted to Hollywood by the unprecedented money and the prospect of respite from the rigors of the stage, Barrymore wrote, in 1926, “The most wonderful accident that ever happened to me was my coming to this God-given vital, youthful, sunny place.”

It took less than a decade for the “wonderful accident” to seem more like a car crash, one which attracted the avid rubbernecking of audiences.

As depression and alcohol ate away at Barrymore’s professionalism, his films, in the words of the astute critic Richard Schickel, “now offered a kind of horrified fascination—had the star slipped another notch, was he holding his own in his battle with this lingering illness of spirit or was he, as sometimes happened… actually rallying?” Despite the virtuosity of some silent performances, a few suave early 1930s leads, and his gut-busting comic bombast in Twentieth Century, Barrymore’s screen career devolved into painful self-parody. 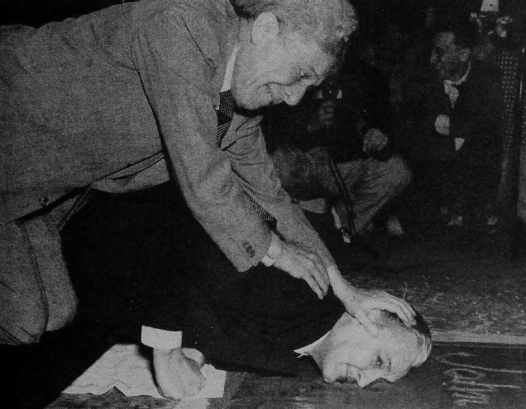 At the low point of his career, literally playing his washed-up self, Barrymore was called upon to deliver Hamlet’s most famous speech. The film, Playmates (1941), would be his last. Get yourself a tissue and watch the scene now:

If a great artist is this great at his worst, one would need astronomical terms to describe his talent at its zenith. The lines that we’ve all heard so much sound both natural and theatrical in Barrymore’s voice; he turns a tune that viewers know by heart into an utterance that drives home man’s universal battle with—and longing for—death.

He makes us forget that he’s reciting the soliloquy in the midst of a somewhat lackluster grab bag of actors. This is Brahms playing in the brothel. This is Tasso scribbling away in prison. In the midst of mediocrity, Barrymore the buffoon delivers the artist that was Barrymore and the genius that is Hamlet—parallel figures representative of all inscrutable greats humbled and confined for what the gods gave them. Denmark is a prison, Hollywood is a prison, the world is a goodly enough prison for Hamlets everywhere.

I’ll admit that I’m pirouetting on the edge of cliché here, so I’ll give you someone else’s much more articulate assessment of Barrymore:

“That was a highly complicated man… a golden boy, a tragic clown grimacing in the darkness, gritting his teeth against the horror—a gallant old acrobat limping over the abyss on a tightrope that was badly frayed,” as Orson Welles told Peter Bogdanovich. Welles’s films might’ve questioned the value of remembering a man after he’s gone, but, in real life, he knew how to eulogize a brother genius. 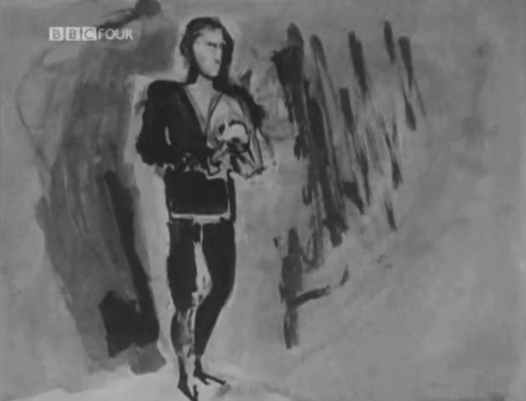 A sketch of Barrymore by Welles

Orson Welles actually saw Barrymore, a friend of his father’s, as Hamlet on Broadway in the early 1920s: “I used to stand in the wings when he was playing Hamlet—matinees, that is; I was a baby then—holding his private bucket of champagne.”

Absorbing the performance like the prodigy he was, Welles retained a vivid memory of Barrymore’s finest hour and cited it as the greatest Hamlet he had ever seen.

At the respectable other end of the auteur spectrum from enfant terrible Welles, Laurence Olivier also extolled Barrymore. Sir Larry lauded the Great Profile not only as a great actor, but also as a key figure in the revival of genuinely passionate portrayals of Shakespeare.

In On Acting, Olivier wrote “My Hamlets in later years owed a great deal to Jack Barrymore. It seemed to me that he breathed life into the character, which, since Irving, had descended into arias and false inflections—all very beautiful and poetic, but castrated. Barrymore put back the balls… When he was on stage, the sun came out.” 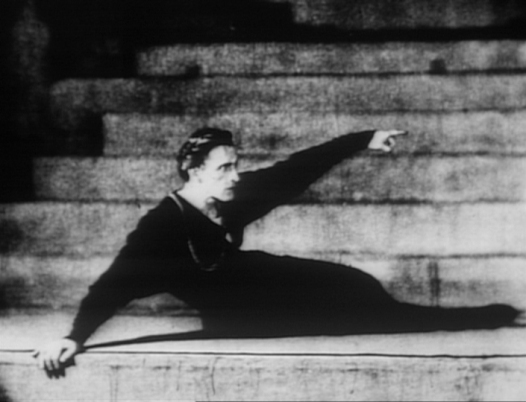 In 1933, 51-year-old Barrymore—his Hamlet stage triumph over a decade behind him—performed a brief scene from the play as a test for a potential motion picture. Whoever approved the test clearly understood that he was preserving history, because the snippet was captured in expensive two-strip Technicolor.

Barrymore’s gifted voice coach Margaret Carrington and Broadway production designer Robert Edmund Jones contributed to the unusually polished screen test. With fine character actors Reginald Denny as Horatio and Donald Crisp as Marcellus, Barrymore acted out the scene in which Hamlet decides to follow what appears to be the ghost of his father. Here it is:

Certainly, this is a rather stagy echo of what the film—an early Technicolor period Hamlet—would’ve been. Yet, listen to the descant of dread and sadness Barrymore sings before the likeness of his father and the low scrape of desperation as he asks what the ghost could do to his soul. There’s immediacy to this man, the sense that he’s living two lives at once and feels suffocated by both. Despite the generally respectful tenor of this clip (I would’ve loved to see Barrymore take on some of Hamlet’s bawdier stuff), one still detects something “dangerous,” as Welles said, about this prince. He’s a time bomb, fuming poetry instead of smoke as his fuse burns down.

Indeed, Barrymore irreverently described Hamlet in 1942 as “[a] ranting pious pervert! But clever, mark you, like all homicidal maniacs! And how I loved to play him. The dear boy and I were meant for each other.”

The story goes that the movie failed to move forward when Barrymore, at a dinner party with his financial backers on the project, began to recite one of the Dane’s speeches and faltered with a lapse of memory. Now, I don’t entirely believe that anecdote, because he could quote Shakespeare with fluency even in the darkest days of his “idiot board” promptings. So, I suspect that other film commitments, the liability of his alcoholism in general, and Barrymore’s own assessment of the limits inherent in his age probably drove the poisoned blade through this Hamlet. But we have an amazing color document—and on YouTube no less.

Please note that the color fragment is not the complete test. I have only been able to locate one more complete version of the test and it is in black-and-white with distracting timestamps. But here it is, for what it’s worth:

(I also recommend this audio-only recording of Barrymore reciting the “O, what a rogue and peasant slave am I!” speech.)

So watch these and re-watch them. Share them, please! Let Barrymore’s lost Hamlet production take on a new life in your mind. We are blessed to have this time capsule, the only moving images to survive as a relic of the immortal, yet ultimately ephemeral performance.

The rest is silence.