I love Poverty Row horror movies the same way I love cracked teacups and moldy vintage paperbacks. The bleak visuals, the improbable scripts, the down-on-their-luck casts give these crackly terrors the half-pathetic charm of unwanted things.

Films like Dead Men Walk and Voodoo Man are crowned by a halo of unintentional tragedy, since we often sense the pious devotion of martyrs to their art: talented actors and directors coping with bottom-of-the-barrel production values and perhaps mercifully brief shoots.

For those not as dorky as I, Poverty Row is a label for the cluster of small film studios, like Republic, Monogram, and PRC, that churned out B-movies for movie theater double bills. Their product would be rented to exhibitors at a flat rate—which meant that no matter how good or popular a Poverty Row flick might be, it was unlikely to rake in any more dough than stipulated.

However, far from the micromanagement that talent had to put up with at big A studios, those working in Poverty Row benefited from an astonishing amount of creative freedom. (Read: virtual indifference.) If you could turn in a salable film with something resembling a beginning, middle, and end—in two weeks—then the producers didn’t care what you did.

While plenty of hacks earned their bread by marching actors around recycled sets, the occasional genius mined precious jewels out of the rough. And Joseph H. Lewis was one of them. Forever immortalized by Gun Crazy, his pulpy noir ballad to l’amour fou, Lewis cut his teeth on grimy B-movies, often imbuing the most routine assignments with an off-kilter grandeur. 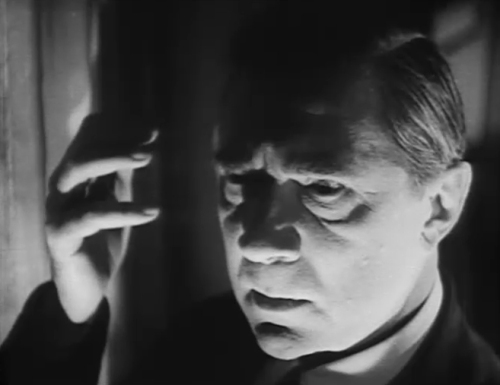 Which brings us to The Invisible Ghost, directed by a rising Lewis and starring a fallen Lugosi in one of 9 movies he made for Monogram. Fans of silents and early talkies will also get right into the gloomy mood at the first sight of a totally unrecognizable, catatonic Betty Compson. After starting her own business, Compson would pull herself out of low-budget actor purgatory, but she’d never forget the “hurt I got down there on Poverty Row.”

Okay, so the movie itself is a little creaky and preposterous (“We’ve killed off the love interest? Better give him a twin brother…”) and I’ve seen pieces of broccoli who can emote more than the romantic lead. But I still urge you to watch it. There’s something borderline Lynchian about this stodgy American household… with a killer for a father and a crazy mother secretly living in the garage.

Savor Bela’s soulful performance. Enjoy the refreshingly wise, likable, and dignified role of an African American butler, not forced to sully himself for offensive laughs. Keep an eye out for clever directorial touches—like swish pans, racked focus, and stark changes of lighting to signify the unleashing of Bela’s latent urge to kill. Drink in the duality of this surprisingly dark, despairing cheapie about an outwardly decent man split between tenderness and rage, a man who becomes a stranger to himself.

And just try to tell me that those fugue-state scenes—in which Bela prowls the house for nubile young women to kill in the place of his long-lost cheating wife, as he creeps towards the camera with a wicked grin—don’t raise a few goosebumps…

The Invisible Ghost has slipped into the public domain, so you can watch it for free on YouTube or download it from the Internet Archive.